It took thirty long hours to get from our hotel room in Baku to the Best Western in downtown San Diego, across ten time zones. Traveling from east to west always seems harder for me than going in the other direction. We’d been to San Diego before, in 2003, during Elva’s March Break. A city of 1.5 million, it’s clean, modern and very walkable, and has an excellent public transportation system. You can ride the LRT and buses all day for $6.


During the four days we spent in the city, we returned to places we’d liked, such as the beach on Coronado Island, Balboa Park, and Old Town. Elva found a nice shopping mall and we visited a car museum that featured a nice classic car and motorcycle collection as well as the baddest lowrider I’ve ever seen up close. I celebrated birthday number 66 with a crab bucket at Joe’s Crab Shack. 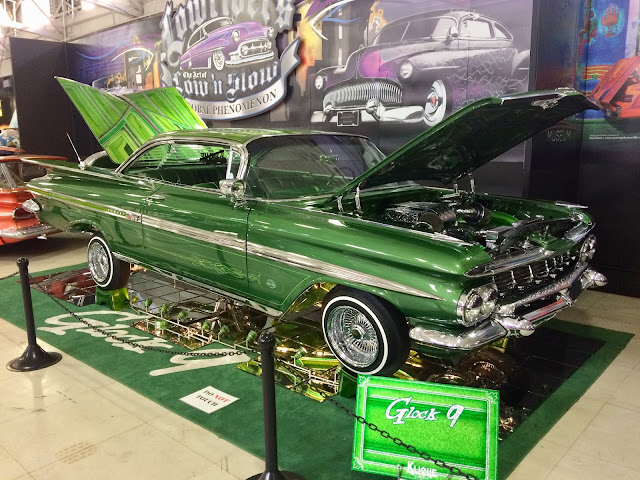 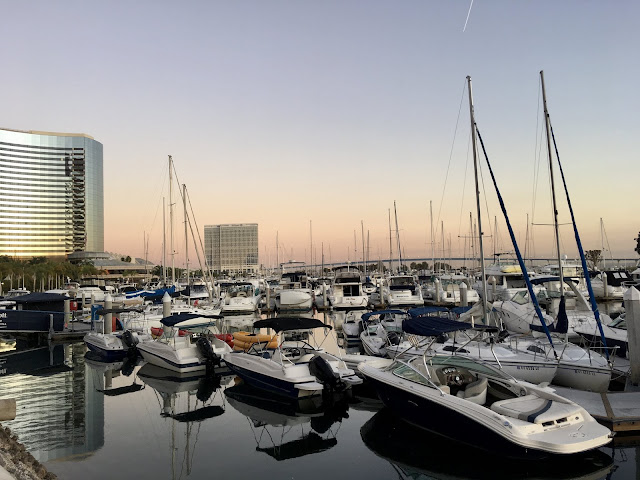 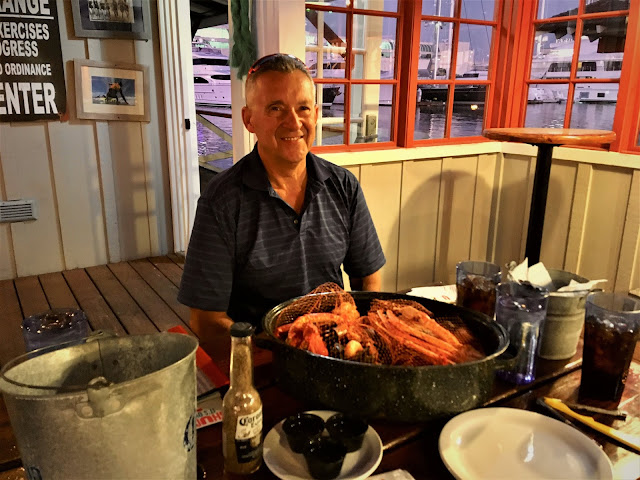 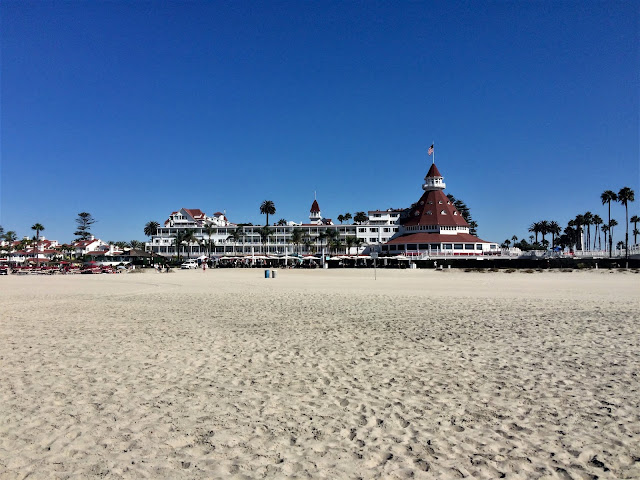 We were glad to board the MS Amsterdam on October 28 and settle into the familiar Holland America surroundings. Our cozy inside cabin looked just like others we’ve stayed in on previous voyages on the Rotterdam, the Zaandam, the Volendam, and the Prinsendam. Five days at sea may seem like a long time but it went by fast. There is always something to do aboard ship and, if you want to do nothing, you can do that too!


We landed in Honolulu on November 3, a Sunday. Elva and I had planned out our day, deciding that we’d buy day passes for public transit, go to Pearl Harbor in the morning and Waikiki Beach in the afternoon. While many passengers opt to take the Holland America shore excursions, we find them outrageously expensive, ranging from $100 US per person for a half-day tour to $250 and more for a full day. We’ve been on the tours before and have found them to be a disappointment for the most part, too often featuring only photo stops and visits to souvenir shops. Not the best way to spend precious time and money.


The Japanese surprise attack on Pearl Harbor on December 7, 1941 resulted in the deaths of some 2,400 military personnel and civilians. It forced the USA to declare war on Japan and enter World War II. It was a sort of coming-of-age for the Americans, not unlike the World War I battle of Vimy Ridge and what it meant for us Canadians.


We’d watched the movie Pearl Harbor onboard ship on our way to Honolulu; the story prepared us well for what we saw. Standing on the USS Arizona Memorial, built atop the sunken hull of the battleship, brought powerful emotions: 1,177 men died on the ship that day and some 900 bodies remain inside the hull. Their names are inscribed on a wall of remembrance. Some survivors, 43 of them, decided to have their remains interred in the hull as well when they passed away, in order to share a final resting place with their comrades. 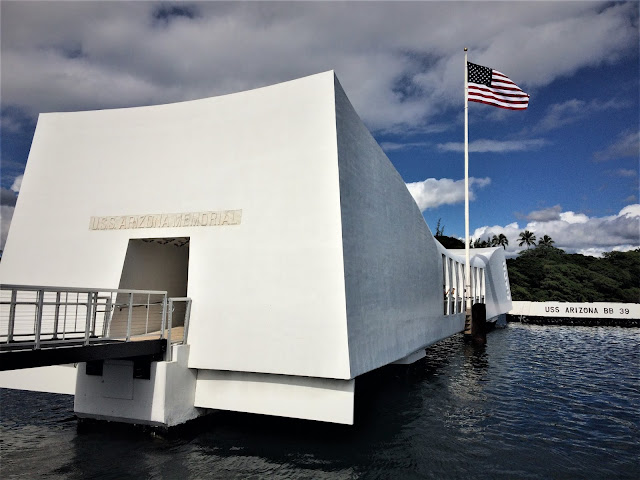 Waikiki Beach is not as nice as Basin Head, but it’s right up there! When I think of some of the really shitty beach resorts we’ve seen, Myrtle Beach being the worst, I have to say I was impressed. The hotels are first-class, the beach is beautiful, the oceanside parks are immaculate, and public transit is very convenient to use. Our total transportation cost for the day: $5 US. Entry to Pearl Harbor was free! Remember, we don’t mind spending money, we just don’t like to waste it… 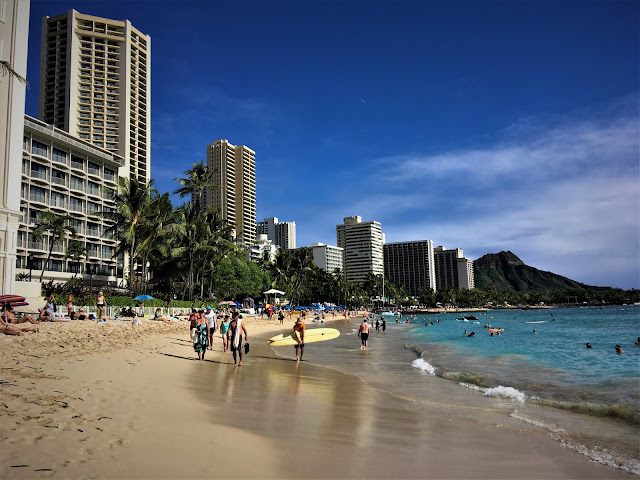 On our second day in Hawai’i, the ship called at the port of Lahaina on the island of Maui. After getting our bearings with the help of a guide at the tourist information office, we rode the local bus for about an hour to Kapalua, a major resort area on the northwestern tip of the island. The vegetation is lush, Eden-like, and the resort hotels very high-end ($1,000 a night!). The beach at Kapalua Bay is small but incredibly beautiful; same goes for its neighbour, Napili Beach. After a nice lunch at the Napili Kai resort, we took the bus back to town and strolled around Lahaina until it was time to return to the ship. We find cruising to be an excellent way to scout places we’d like to come back to. Maui is definitely a keeper! 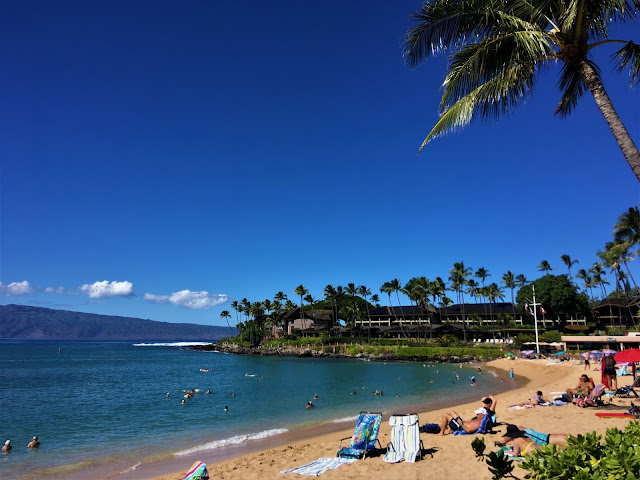 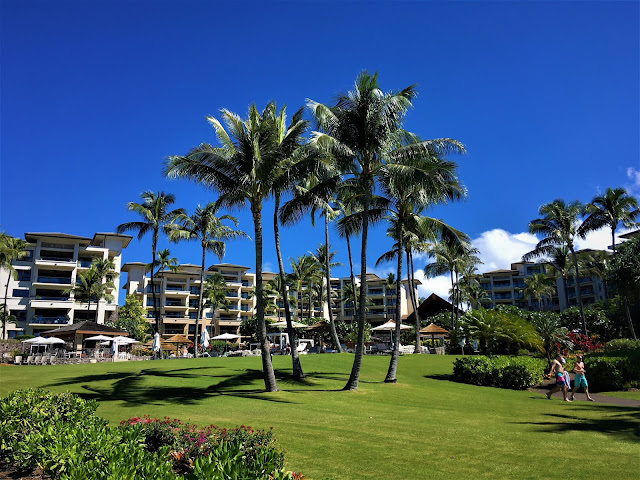 The third island we visited, Kauai, is said to be the second-wettest place on earth. We rented a car and drove west and north until we reached Waimea Canyon. We stopped at several lookouts to take in the canyon’s features: the many colours of the rock faces, the river far below, and the waterfall on the left of the photo. The road ended at Kalalau Lookout, shrouded unfortunately in a thick fog. On the way back down the mountain, the heavens opened.


Not pressed for time, we decided to drive east and north to see the rest of the coast and take in a couple of recommended sights. Wailua Falls was a bit of a disappointment but the lighthouse at Kilauea Point made the drive worthwhile. In the seven hours we had the car, we circumnavigated the island. Kauai is quite different from Oahu and Maui. It’s much less touristy; more laid-back and natural. 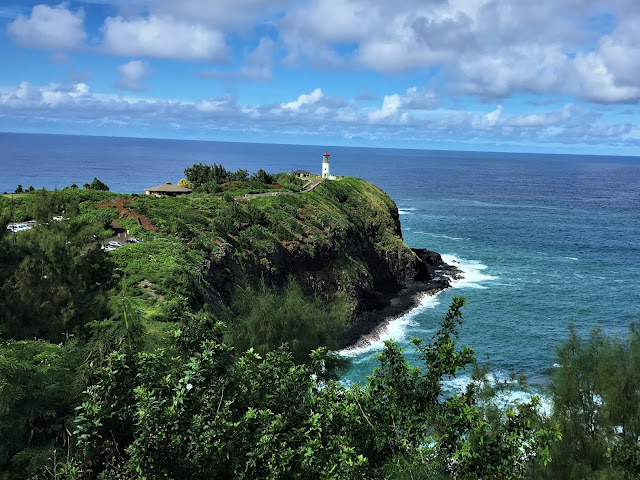 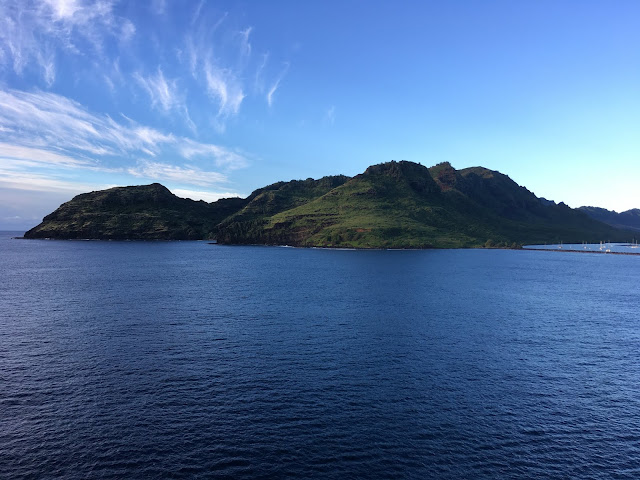 The town where we docked is called Lihue; not a big place but it has enough for the determined shopper. We overheard one passenger whose plan for the day was to take the free shuttle to a second-hand clothing store and spend her day there. Can you imagine paying good money to take a cruise to Charlottetown just to spend your day at Value Village? Another guy spent the day at a golf course… Looking for lost balls! “Found twenty-seven,” he told me proudly. Go figure!


Our last two ports of call in Hawai’i were Hilo and Kona on the Big Island. We had high expectations for Hilo, thinking we’d be able to use local transportation to get around. But when we got off the ship, everything was chaos at the “cruise terminal”, nothing more than a warehouse really, with people rushing in every direction. Shuttles to take us downtown, four kilometers distant, were few and far between, so we walked. Downtown is run down and public bus service is very limited. It was even hard to find wifi. We wasted $42 on the hop-on-hop-off bus that took us to places we could have walked. Lesson learned: if a place doesn’t look interesting at first sight, it probably won’t get any better. Trust your instincts and save your money!


The Big Island is slightly larger than Prince Edward Island and contains Hawai’i’s two tallest mountains, Mauna Loa and Mauna Kea. Our second stop, the town of Kailua-Kona proved to be far more interesting than Hilo. You may have heard of Kona coffee; it’s of course grown there on the slopes of a dormant volcano. The last ruler of the Hawai’ian people, King Kamehameha, spent his final years in the area and one of his palaces, Hulihee, is shown in the photo below.


Our ship anchored in the bay and passengers were transported to the pier by tender. We enjoyed walking around the town, taking in the sights. A pocket beach next to the pier was perfect for a dip (the temperature was 32 C). We watched dolphins frolic in the harbour as they joined a group of snorkelers. Nearby, swimmers trained at the very spot where the Kona Ironman World Championship starts and finishes. 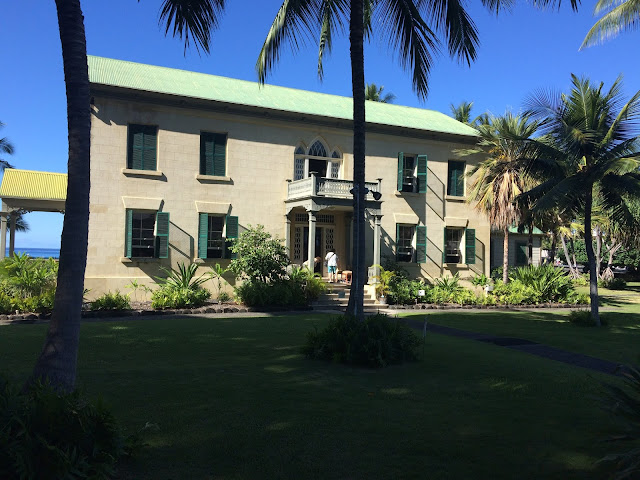 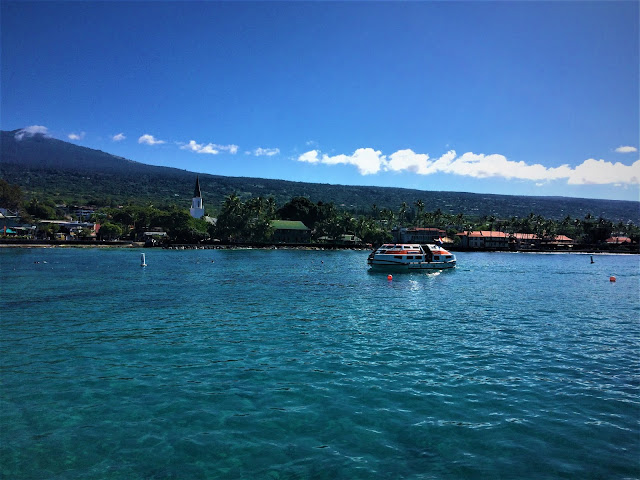 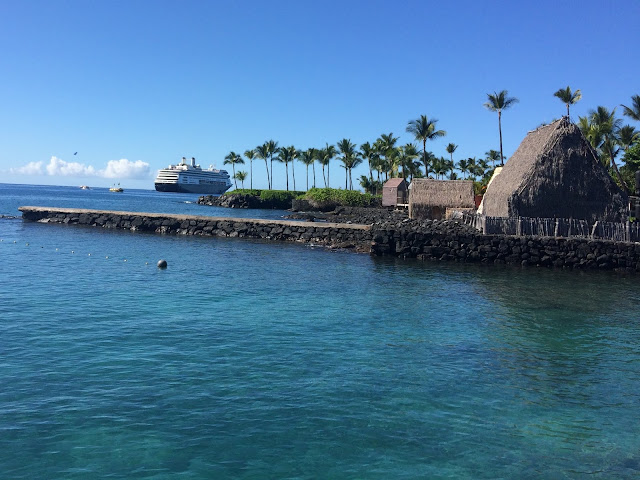 We know many people who’ve visited Hawai’i and loved it. We met passengers on the ship who’d been there several times. Now we know why they decided to go back. Each island has its own particular charm. Although they look and feel a lot like the Caribbean islands, they have much more to offer.


The MS Amsterdam will set sail from Kailua-Kona and head south. We’ll have five days at sea before reaching our next stop, American Samoa. Half-way there, we’ll stop for a few hours at Tabuaeran (Fanning Island), a coral atoll that forms part of the small island nation of Kiribati (pronounced Kiribass). In an interesting coincidence, the island was named by the British in honour of Edmund Fanning, the nephew of Governor Edmund Fanning for whom Prince Edward Island's Government House is named, "Fanningbank". Another bit of Island trivia: the community of Lady Fane, near Crapaud, was named after Governor Fanning's wife. After American Samoa, we’ll visit Samoa, Fiji, and Vanuatu.

Posted by Jean-Paul Arsenault at 15:45