In the space of two weeks, Elva and I each lost a good friend.  Martha Lebel died on June 24 and Ralph Thompson on July 9, both of cancer.  Both were strong, clean-living individuals who took good care of themselves.  They fought the disease to the end and took advantage of every treatment medical science could offer.  If nothing else, this proves there is still much we don’t know about the causes of and treatments for this terrible disease, despite years of research by brilliant minds.
Martha was a true Madeleinienne: devoted partner and mother; good neighbour and friend.  She was kind, generous, fun-loving, gregarious, and tough as nails.  It was nothing for her to swim in the ocean when the water was barely above 15 degrees Celcius.  She loved hiking, camping, cycling, canoeing, and digging bar clams; anything that involved the outdoors.  In her work as a kindergarten teacher, she touched many young lives in a very positive way. 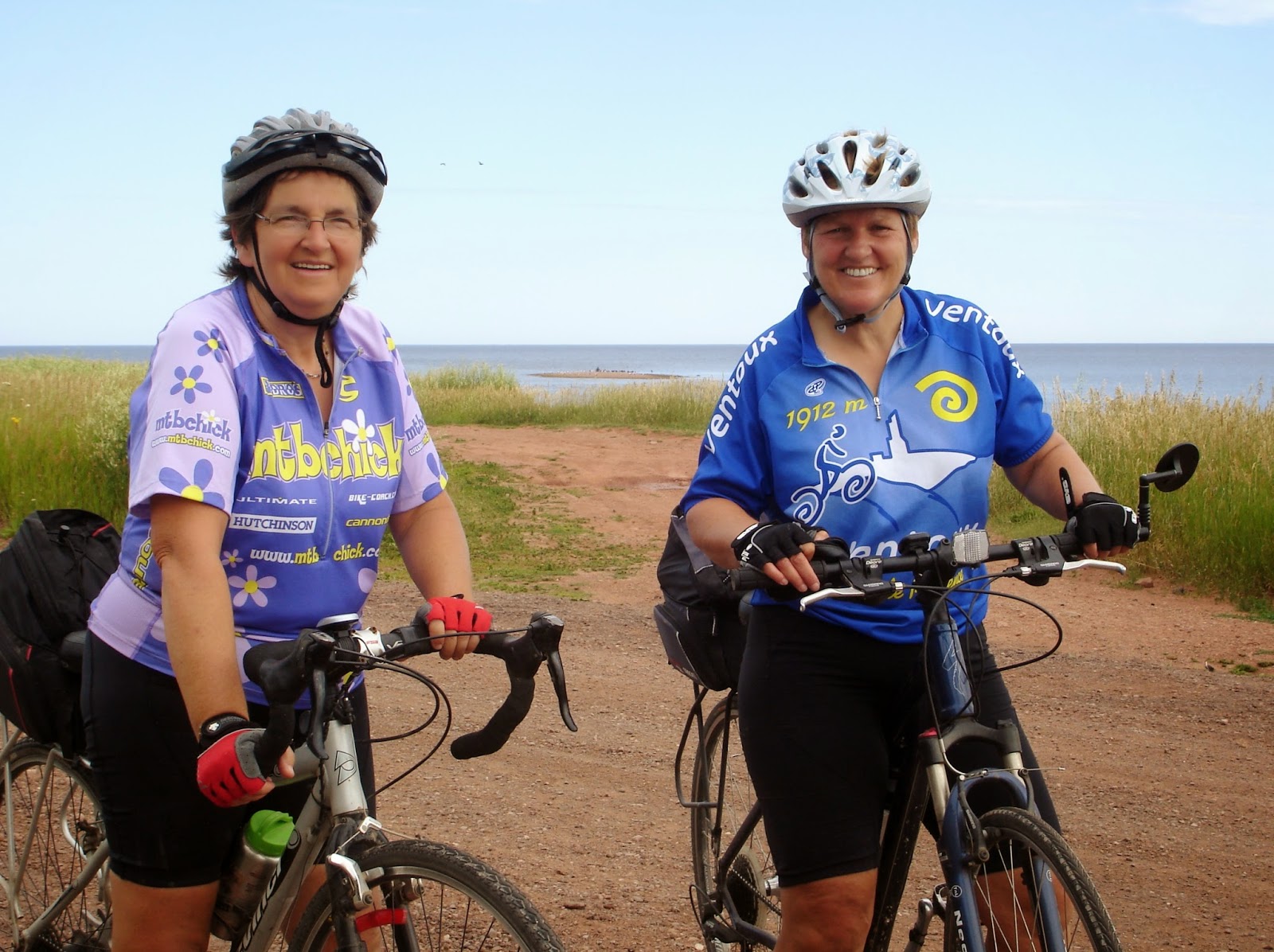 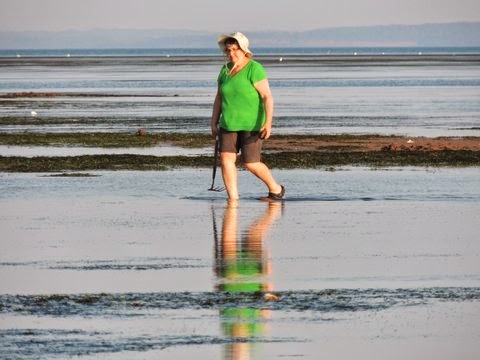 Elva and Martha's many friends will miss her greatly.  Each year, three or four of them would go off on an adventure, either hiking or cycling, and Elva always came back with a ton of pictures and more stories about the fun they’d had together.  Due to her illness, Martha and her husband, Jean-Yves, had to cancel a planned trip to Spain last September where they planned to walk the Camino.  Elva did the walk herself, and dedicated the experience to Martha.
I only knew Ralph Thompson for five years or so.  Ironically, our friendship didn’t get off to a very good start.  In October of 2008 I got a call from the provincial government asking if I’d be interested in working with the Commission on Land Use and Local Governance.  Time passed and, a couple of months later, Ralph and I met to discuss the assignment in his office in Dr. Ellis’ former medical clinic in Hunter River.
It was plain to me that day that Ralph wasn’t sure he’d be needing any help with the task he’d been given.  Especially not from a guy he’d never met before and knew little about.  And I could tell he was measuring me as we spoke.  Although I did my best to make a good first impression, it was like playing cards with a very good poker player.  He was very hard to read!
Long story short, I got the job!  Our little team of Ralph, Debbie Gillespie and I spent the better part of a year together before the Commission’s final report was released in January 2010.  Ralph was a great guy to work with.  He had his strengths and I had mine, and we complemented one another very well.
When government appointed Ralph to head the Commission on Land Use and Local Governance, it should have known what to expect.  Ralph was not only a wise and learned man possessed of a great knowledge of the Island and its people, he was also a straight shooter.  I’ve heard it said that the first rule of the courtroom lawyer is to know the answer to a question before asking it.  So Ralph's findings should have come as no surprise.
More than four years have passed since the report was released, and the provincial government has little it can point to in the form of progress on the key recommendations.  I know this was a source of some disappointment to Ralph.  He felt, and rightly so, that the time had come for change in the way we approach development on this Island and in the way people made important decisions about their communities.  He also felt, and rightly so, that the changes he recommended were both reasonable and practical.
Ralph loved to tell stories.  He’d come into my office in Hunter River at least once a day and ask: “Did I ever tell you about the time…?”  And off he’d go.  Sometimes it was a story about practising law in Charlottetown and the interesting characters he met there.  Other times it was about a case he’d heard.  And he even told the odd joke.  He wasn’t half bad at it either; providing you had the time … and the patience … to wait for the punch line.  Nobody ever accused Ralph of being a fast talker!
As he spoke about his time on the bench, it was clear to me that Ralph considered this the highlight of his career.  His sense of fairness came through loud and clear, as did his concern for those members of Island society who hadn’t had the same chance at life that he had.  Before passing judgement or imposing a sentence, I’m sure Ralph would have placed himself in the other person’s shoes.
Ralph was a country boy at heart.  He loved everything about farming and he had a great respect for those who make their living from the land.  Ralph loved his horses and he loved spending time in the saddle.  Myself, I’ve never ridden a horse I couldn’t fall off of.  But I do understand the attraction.  The horses on Ralph and Karen’s farm were beautiful and intelligent animals; well bred, well cared for, and well trained.  Through his vivid descriptions of their personalities, he made them seem almost human.
Ralph was an avid and accomplished sailor.  He spoke often about trips he and Karen took over the years and, as he did, his face would light up.  He treasured the feeling of freedom, independence and adventure that only a sailboat experience can provide.  Elva and I spent a memorable afternoon on Ralph and Karen’s sailboat. 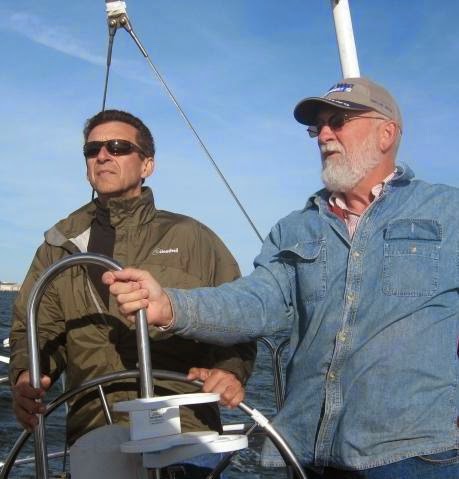 My friend was first and foremost a family man: a father, grandfather and loving partner.  He spoke of his love for his children and his grandchildren, and how proud he was of their accomplishments.  He spoke of the wonderful years he and Karen spent together, working as a team in everything they did.

As he fought his illness, Ralph taught me about courage, the importance of a positive attitude and, in the end, about acceptance.  I admire his great strength.  Karen was his rock; forever supportive and always welcoming when Elva and I visited.


Although Ralph and I come from very different backgrounds — his being English Protestant and mine Acadian Catholic — we shared the same values and had the same opinions on many issues, including politics.  I found him to be very open-minded about things and very modern in his thinking.  Most of all, we shared a great love for this Island, for the land, and for the people that make it such a wonderful place to live.
A couple of years ago, Ralph and Karen bought a convertible, a Mazda MX-5, just like the one my wife, Elva, owns.  Last summer, we went for a drive together through central Prince County.  It reminded us once again that we live in one of the most beautiful places on this Earth.  We drove along the shore of Malpeque Bay, stopped to visit Saint Patrick’s Church in Grand River and made our way to Milligan’s Wharf.  We visited Elaine and Léonce Arsenault’s antique store in Richmond and went past Elva’s home place in Egmont Bay.
As Ralph and I drove along behind Karen and Elva, he leaned over to me and said: “See those two nice-looking blondes in the car in front of us?  Why don’t we follow them for awhile and see where they go.  Maybe we can strike up a conversation when they pull over.”  I felt the same way.  It was one of those special days I’ll never forget and can only wish we could experience again.
Not long before he passed away, I visited Ralph in the hospital.  We happened to be alone that day, just the two of us.  After the usual back and forth about the weather and how the crops were doing, he asked me if I’d consider saying a few words at his funeral service.  I answered that, of course, I would.  I said I’d be honoured to do so.
“But Ralph”, I added, “there are so many people who’ve known you far longer than I have.”  He answered: “It’s not how long you’ve known a person; it’s how well that counts.  You and I are kindred spirits, J-P.”  I’ll never forget those words.

Good friends are hard to find and harder to say goodbye to when the time comes.
Posted by Jean-Paul Arsenault at 12:20 No comments: