After four days at sea, we arrived in Italy, glad to be on solid ground after having spent 11 of 13 days at sea between Mumbai and Naples.  Along the way, we met Bob and Lana Waugh who’d started their journey in Singapore.  Bob is an Islander, born and raised in Summerside; Lana a Newfoundlander from St. John’s.  They spend most of the year in Venice, Florida, and summer in Stanley Bridge.
First on the agenda was a visit to Herculaneum, a city that disappeared when nearby Mount Vesuvius erupted in 79 A.D.  I’d been to Pompeii, destroyed by the same eruption, and wanted to compare the two.  Volcanic material traveled down the mountain and hit the ancient city at high speeds and very high temperatures.  Many of its 4,000 inhabitants were buried alive.  The present shoreline is 400 metres out to sea from where it was before the eruption.  The photo below shows Herculaneum’s waterfront, covered by at least 20 metres of volcanic material. 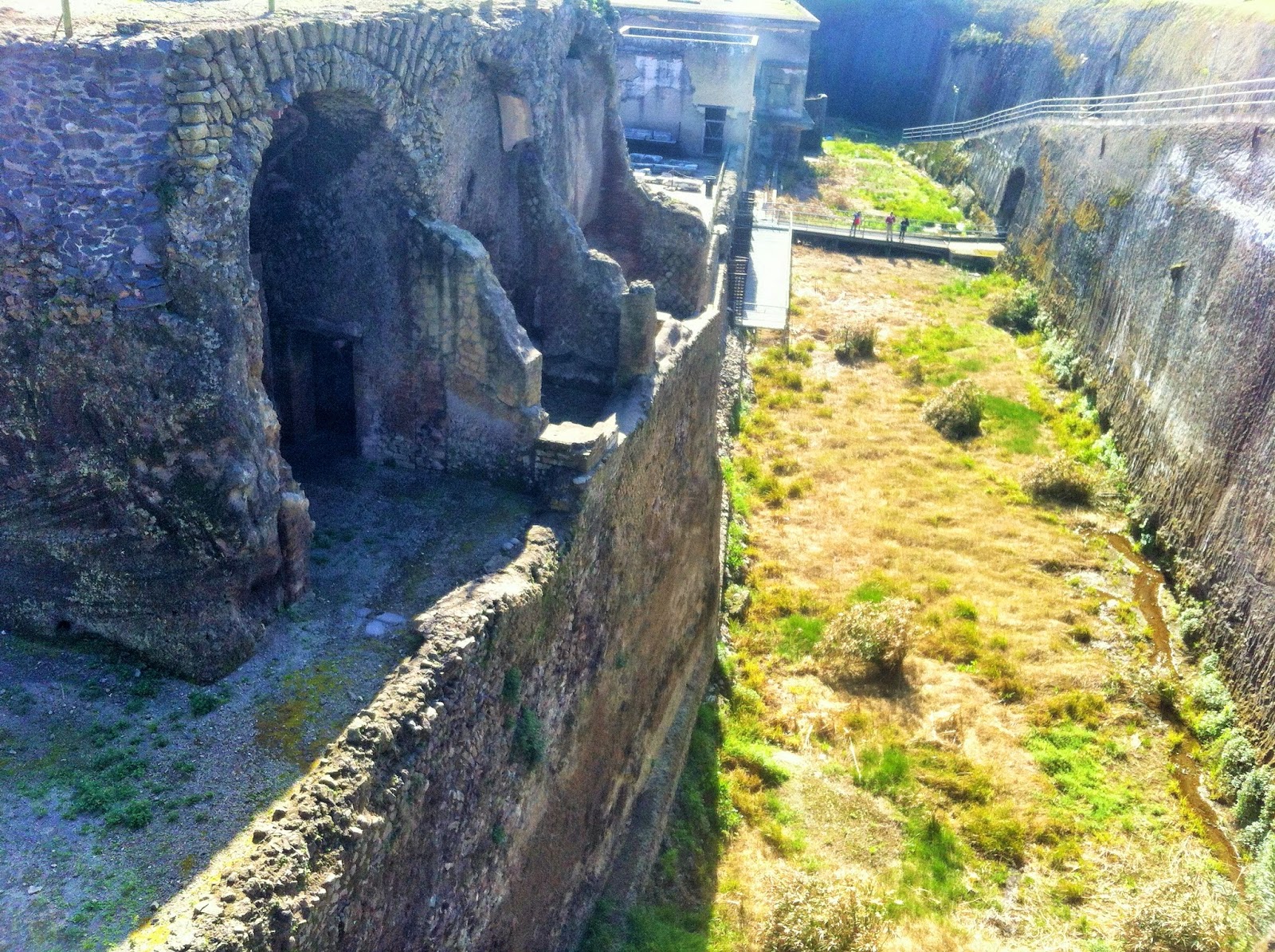 Skeletons of some of the victims have been left in place as a reminder of the tragedy.  The streets and many of the buildings are very well preserved. 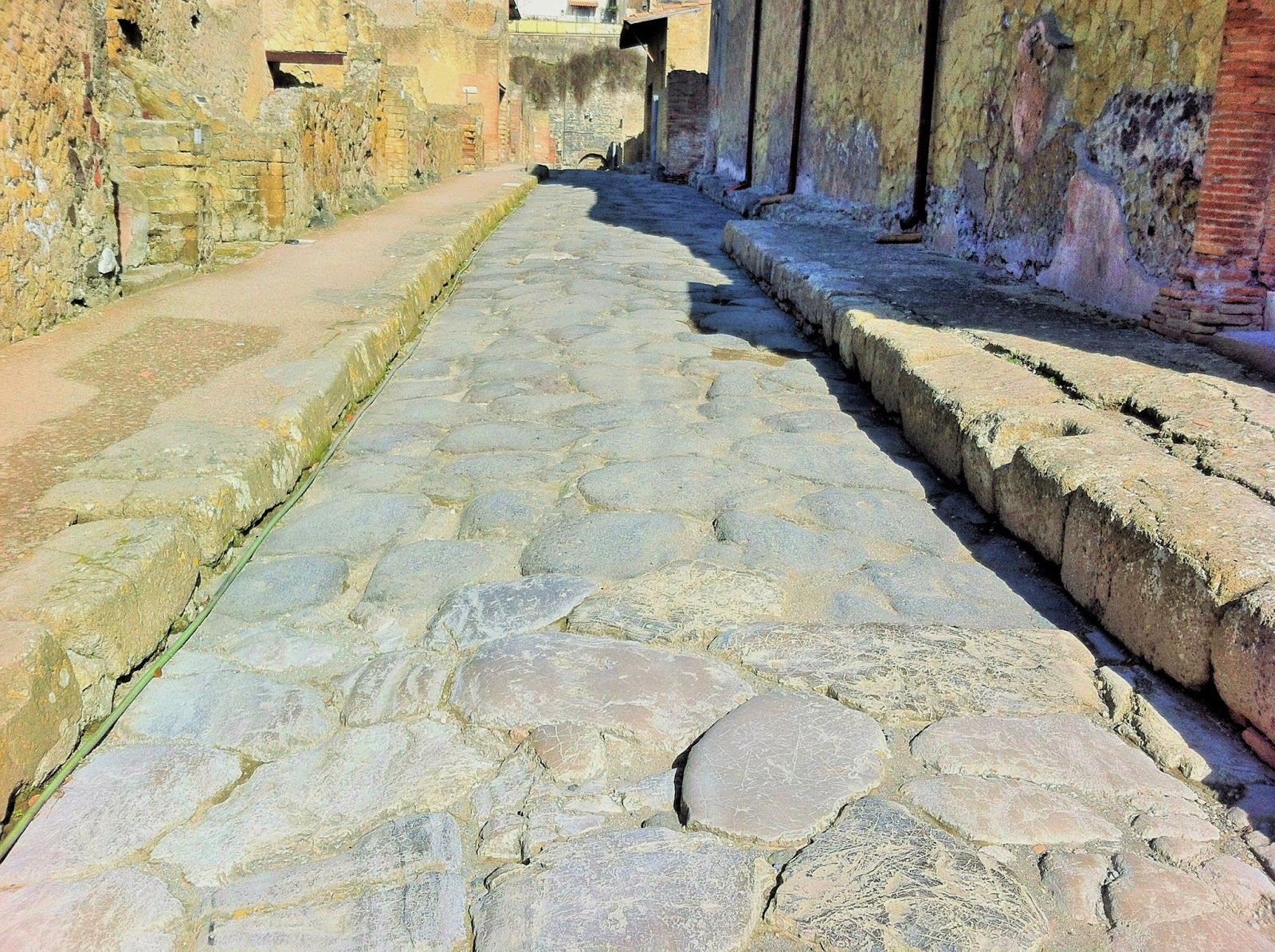 Naples is Italy’s second-largest city, made famous as the home of pizza.  Elva made us each a good one for lunch! 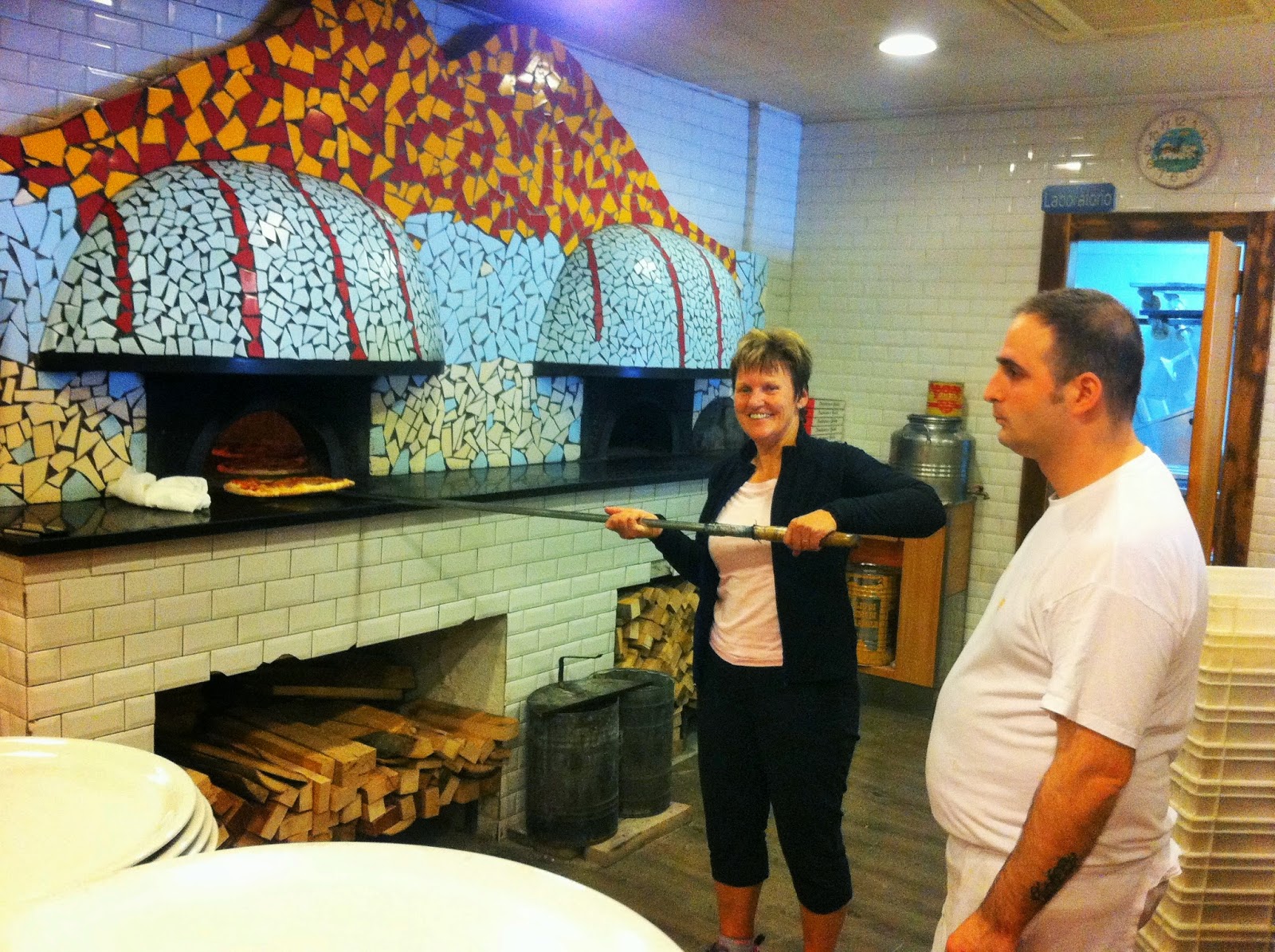 The next morning found us docked in Civitavecchia, the port city that serves Rome.  Since we’d been to Rome before, we opted to stroll around the port and make the most of the day.  We lucked out!  A crisp and clear day, with few tourists and an abundance of locals enjoying a Sunday walk.  We attended Palm Sunday mass in the packed Cathedral, had pizza at a sidewalk café, and strolled the handsome seafront promenade.  I watched enviously as a cyclist wheeled past on a high-end Colnago, followed not long after by an ear-splitting convoy of fifty or so Harley riders.  The best days are those that just happen! 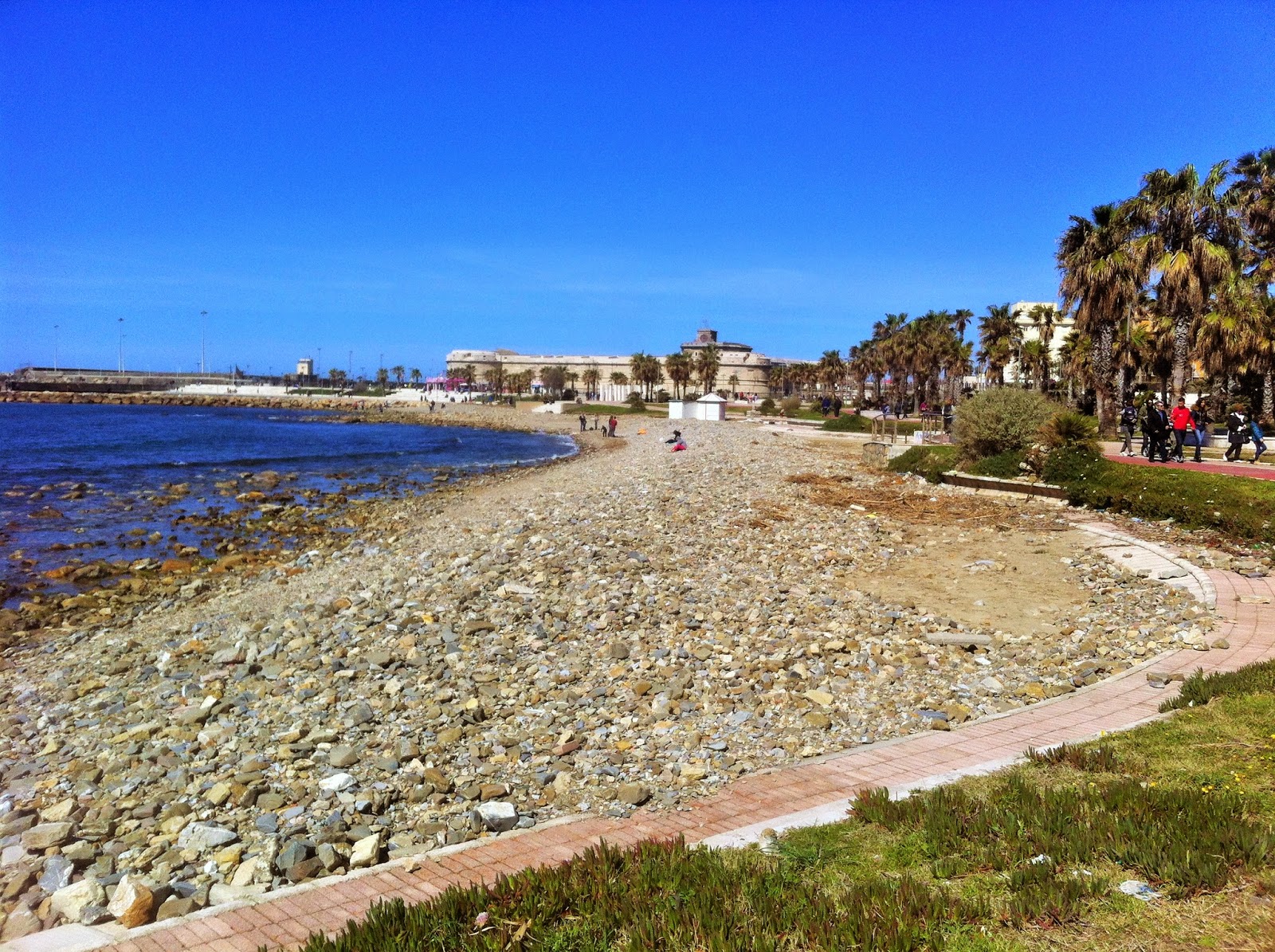 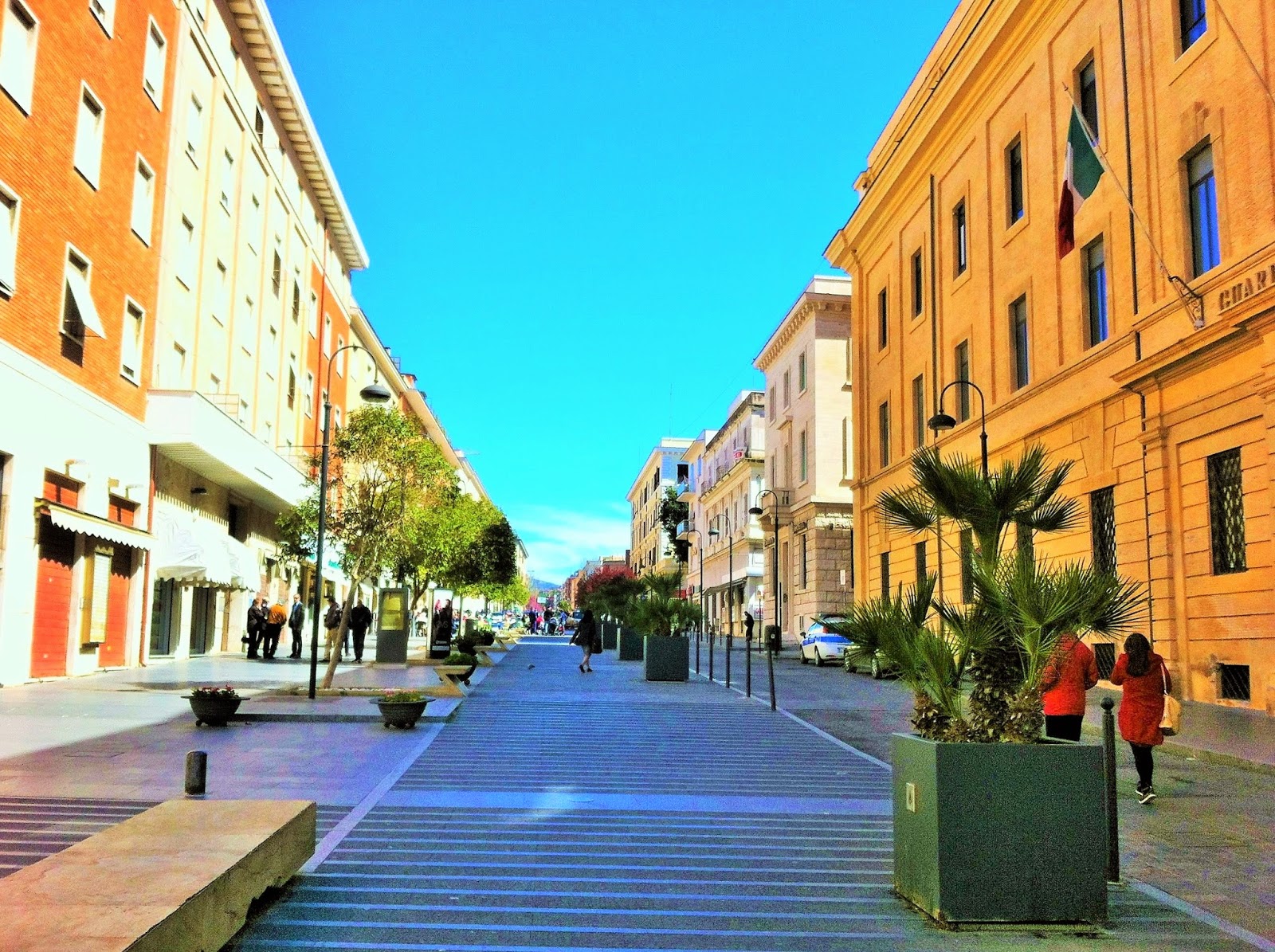 Before arriving at our next port of call, Ajaccio, Corsica, we sailed through a pretty rough patch.  Our first time in Corsica, in the fall of 2013, we’d opted for an excursion and hadn’t had time to visit the city.  This time, we made the most of a short stay and explored on foot.  Besides the many statues and public spaces honouring Ajaccio’s favourite son, Napoleon Bonaparte, there’s much to see and do there.  It’s been added to our list of ‘keepers’, places we’d like to come back to some day. 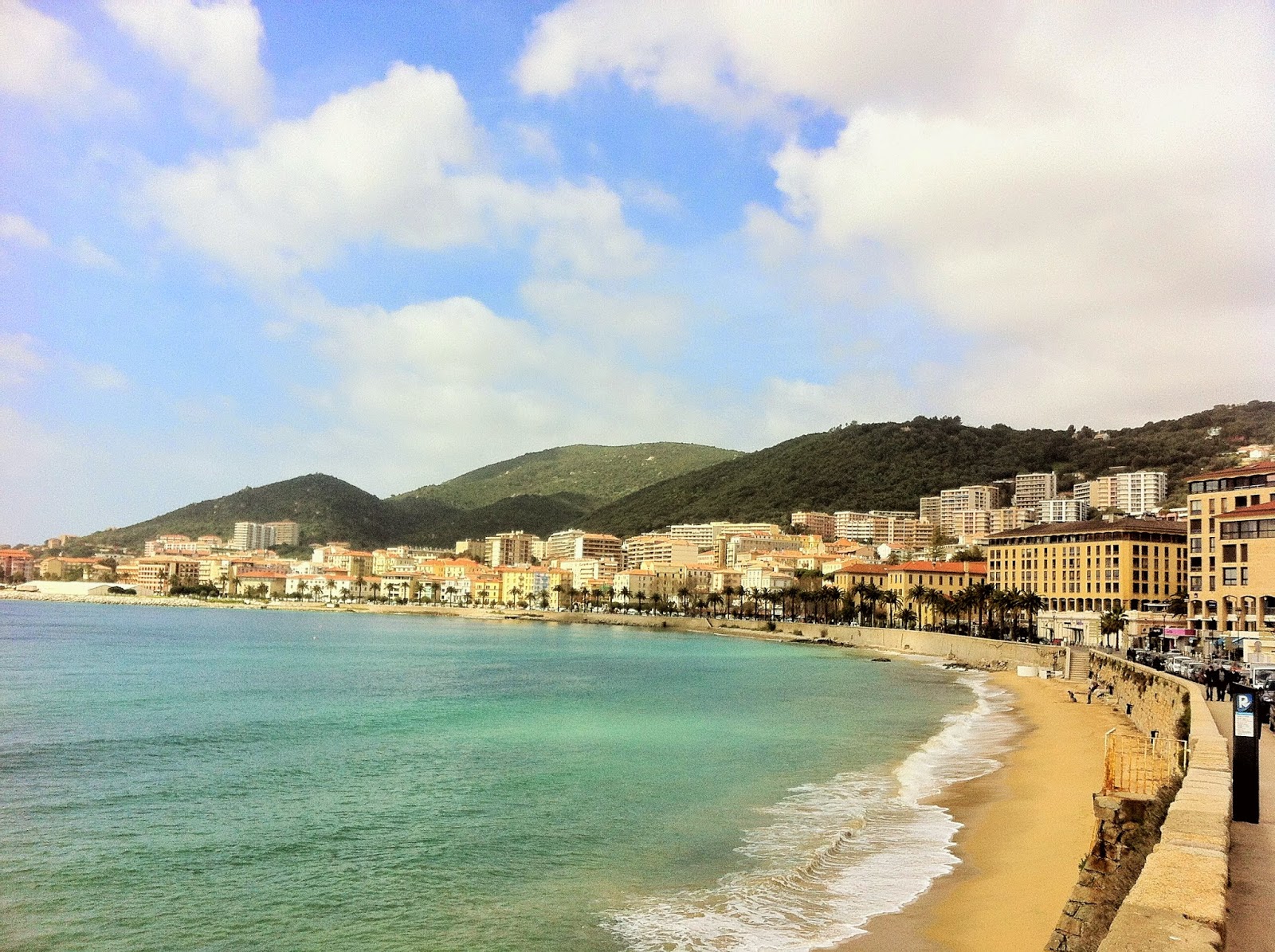 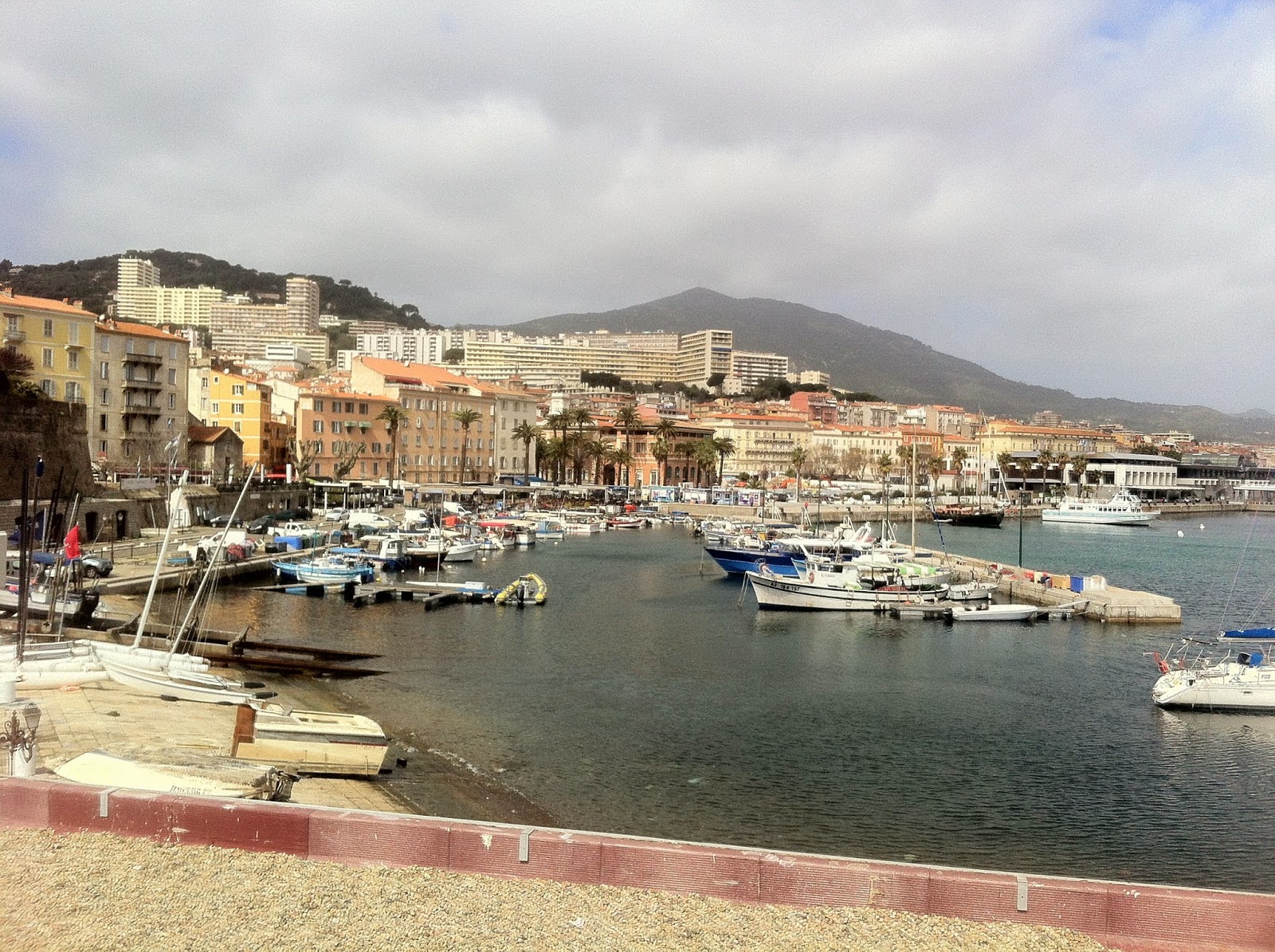 We hadn’t forgotten how beautiful Barcelona is, but it was nice to reconnect.  We walked all day, visiting as many of our favourite places as time and our tired feet permitted: La Rambla, Plaça de Catalunya, Paseig de Gracia, Boqueria Market, Plaça d’Espanya, the Monjuic Fountains, the Gothic Quarter, Port Vell, and the beaches.  What a magnificent city! 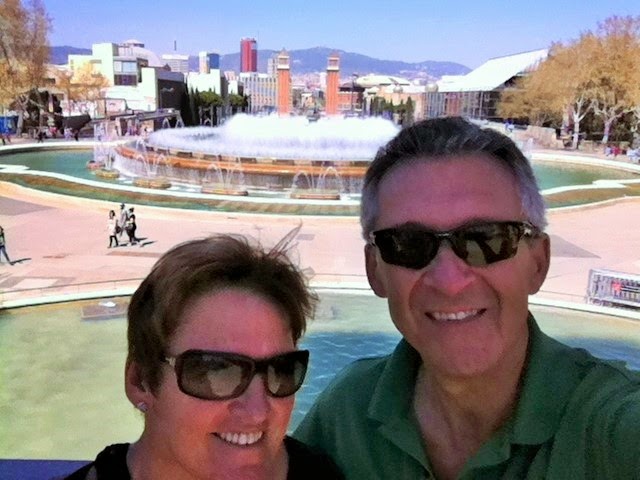 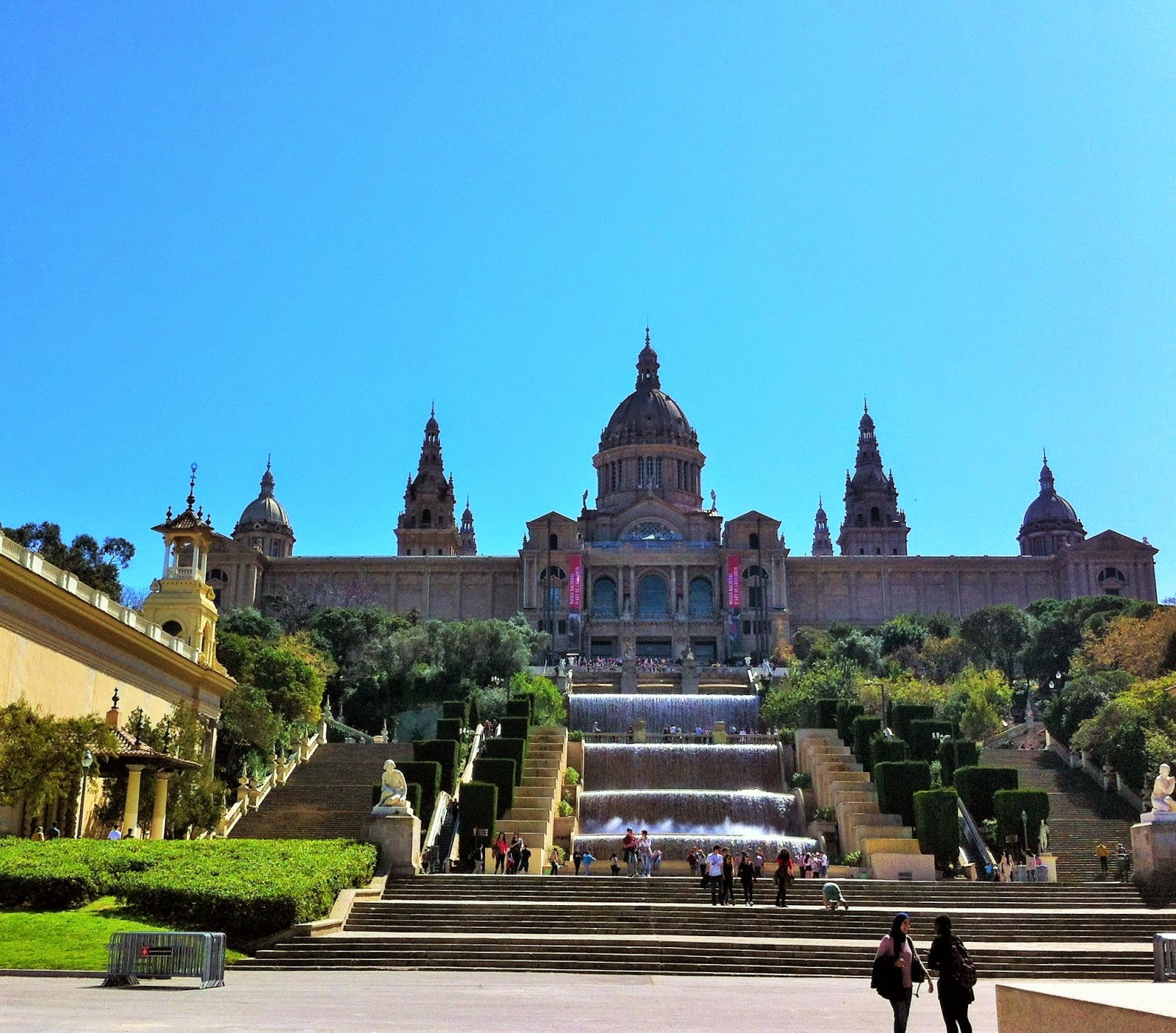 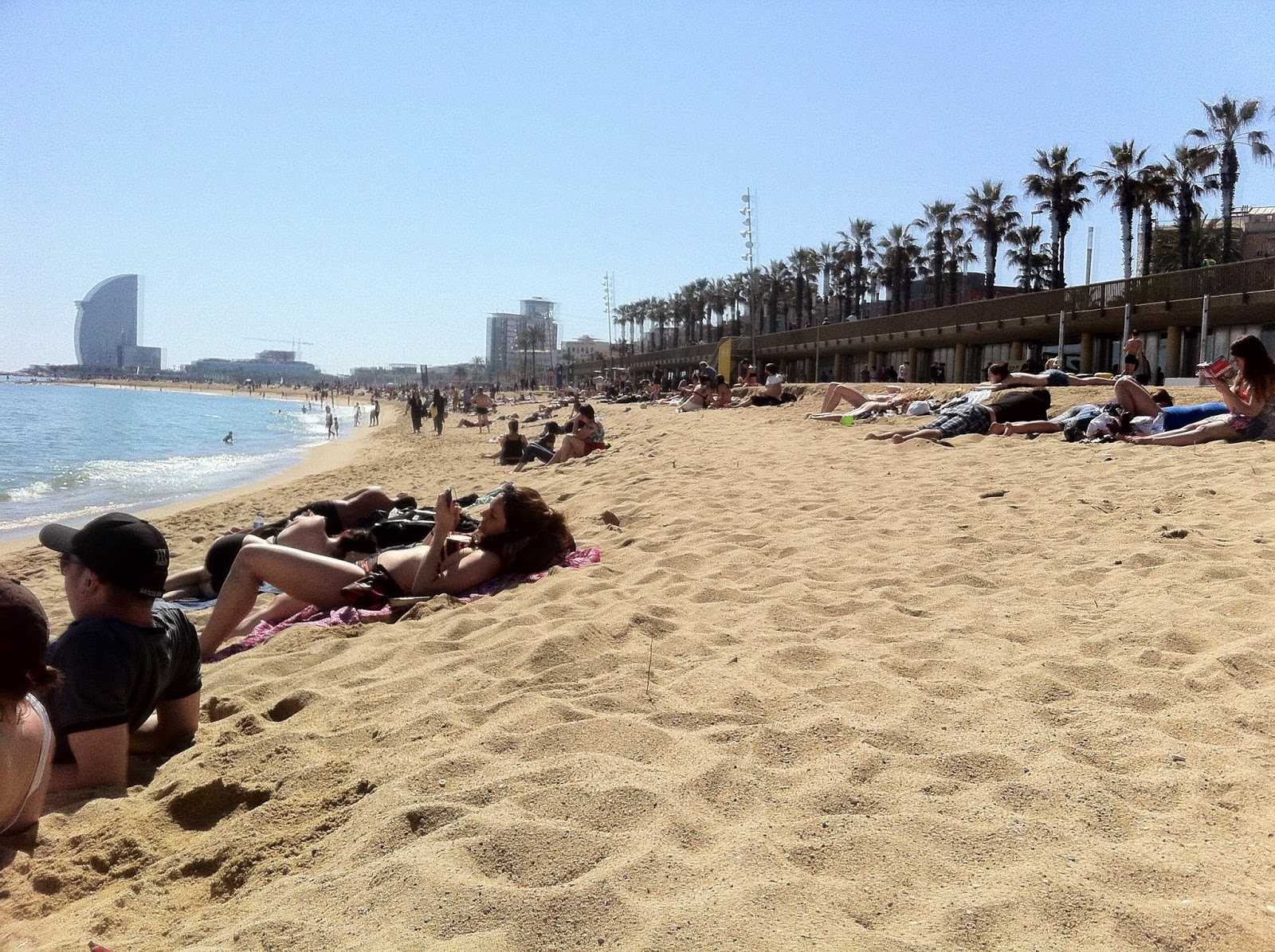 Gibraltar is a British Overseas Territory, one of the few remaining vestiges of a once-vast Empire.  It’s actually a peninsula connected to the Spanish mainland by a narrow isthmus - 6 sq. km. or so of solid limestone that rises to a little over 400 metres and is home to 30,000 people.  The old saying “Solid as the Rock of Gibraltar” is quite appropriate. 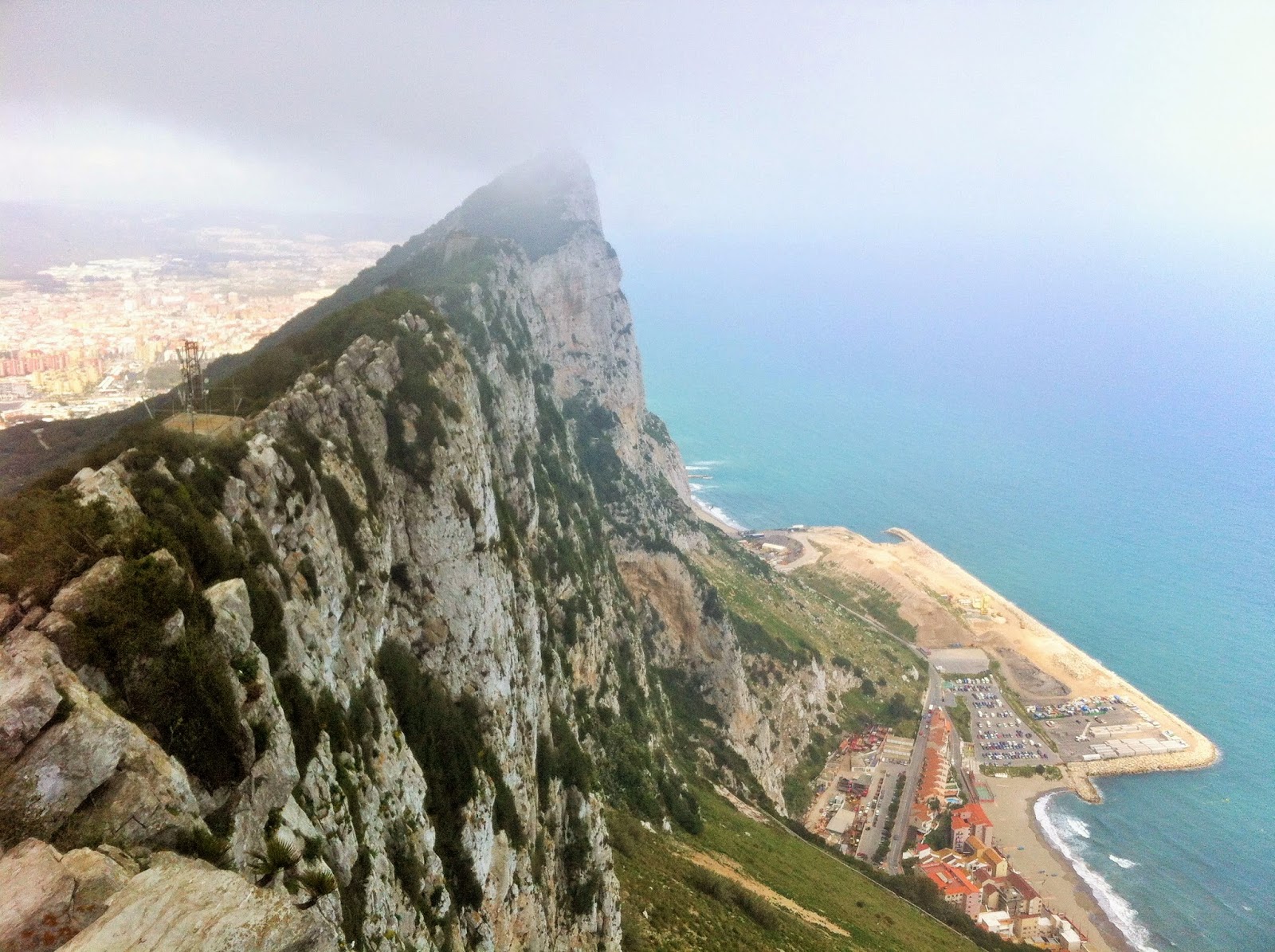 Elva and I decided we’d climb to the top instead of riding the cable car or taking a taxi.  It turned out to be the right decision.  On the way up, we crossed paths with the ubiquitous Barbary apes, semi-wild macaques believed to have been brought here from North Africa by the Moors.  The view from the top was incredible!  On the way down, we visited the magnificent St. Michael’s Cave, which features the most impressive ‘cathedral’ we’ve ever seen.  This picture hardly does it justice. 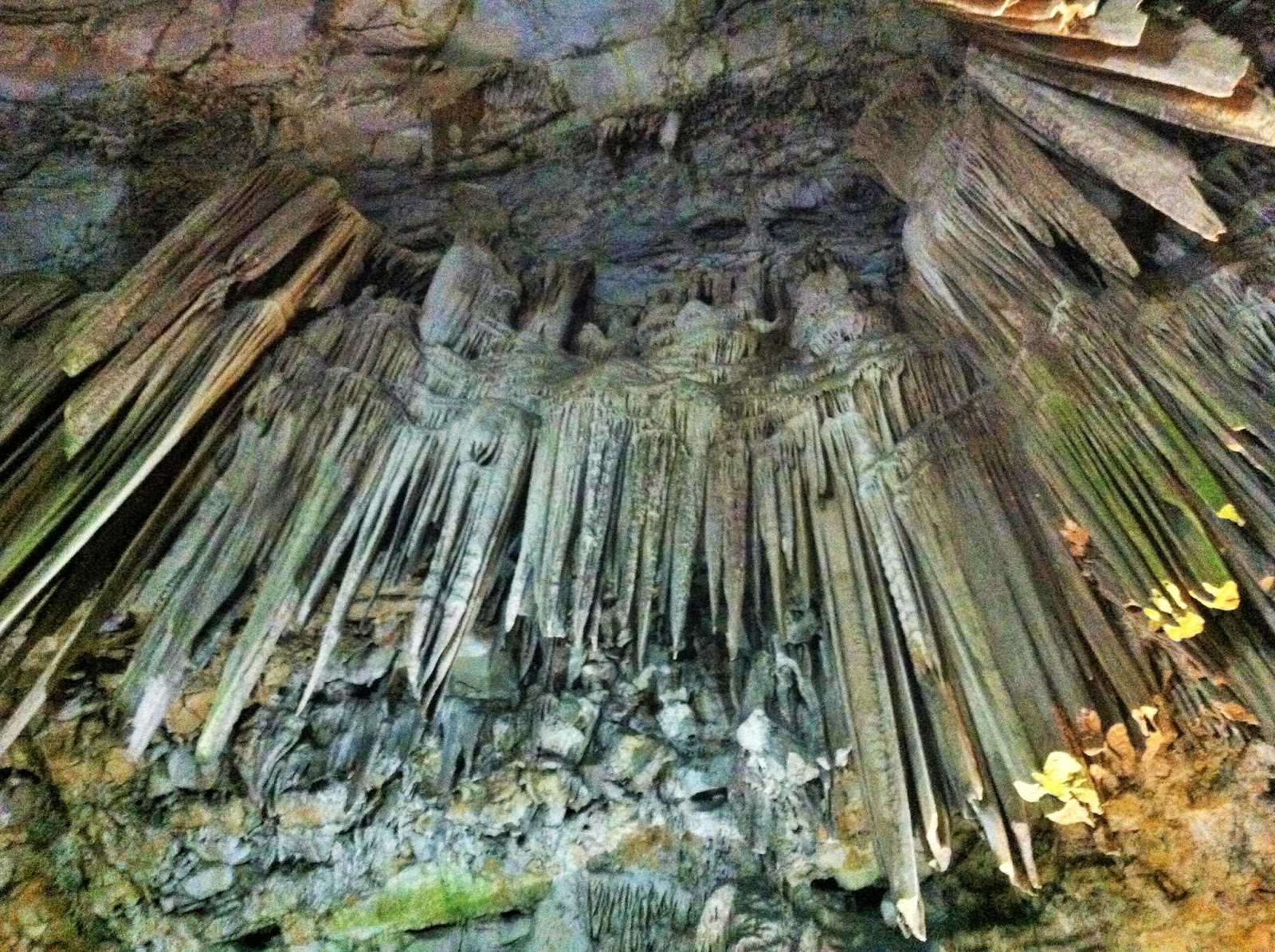 Our last port of call was Cadiz, a small city in the south of Spain on the Atlantic coast.  It being Good Friday, we didn’t expect much action.  But, as has often happened on this trip, we were surprised.  Around 9:30, we came across the beginnings of a procession, and figured it must be going to the Cathedral.  We parked ourselves as close as we could to the route and watched in amazement as a huge ornately carved platform was hefted through the narrow streets.  We were told that as many as sixty men were required to carry it; all we could see were their feet. 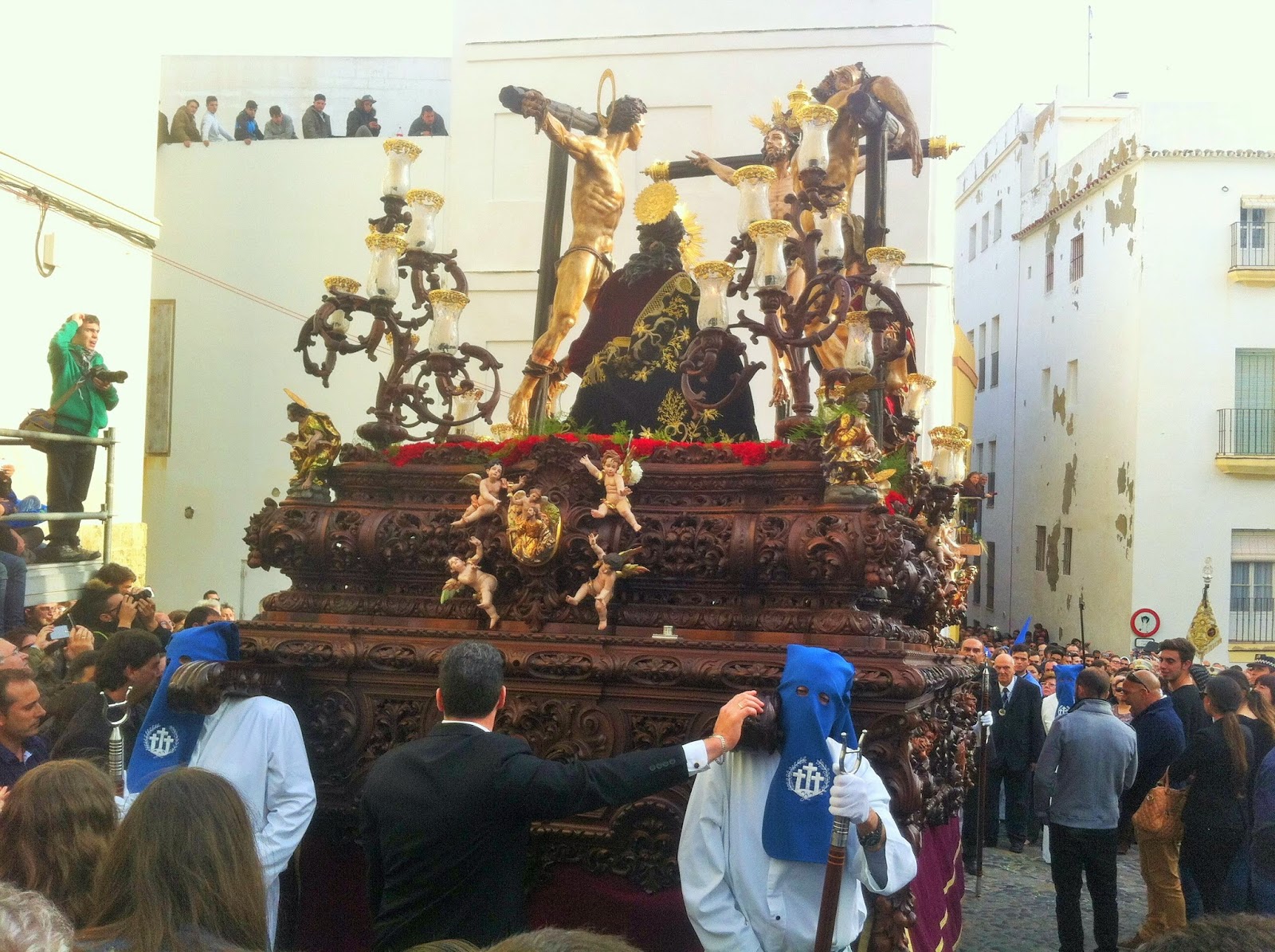 They were accompanied by people wearing these strange-looking costumes.  No, they’re not Ku Klux Klan!  In the Catholic context, the head coverings symbolize confession and repentance, and they’re probably the origin of the ‘dunce cap’. 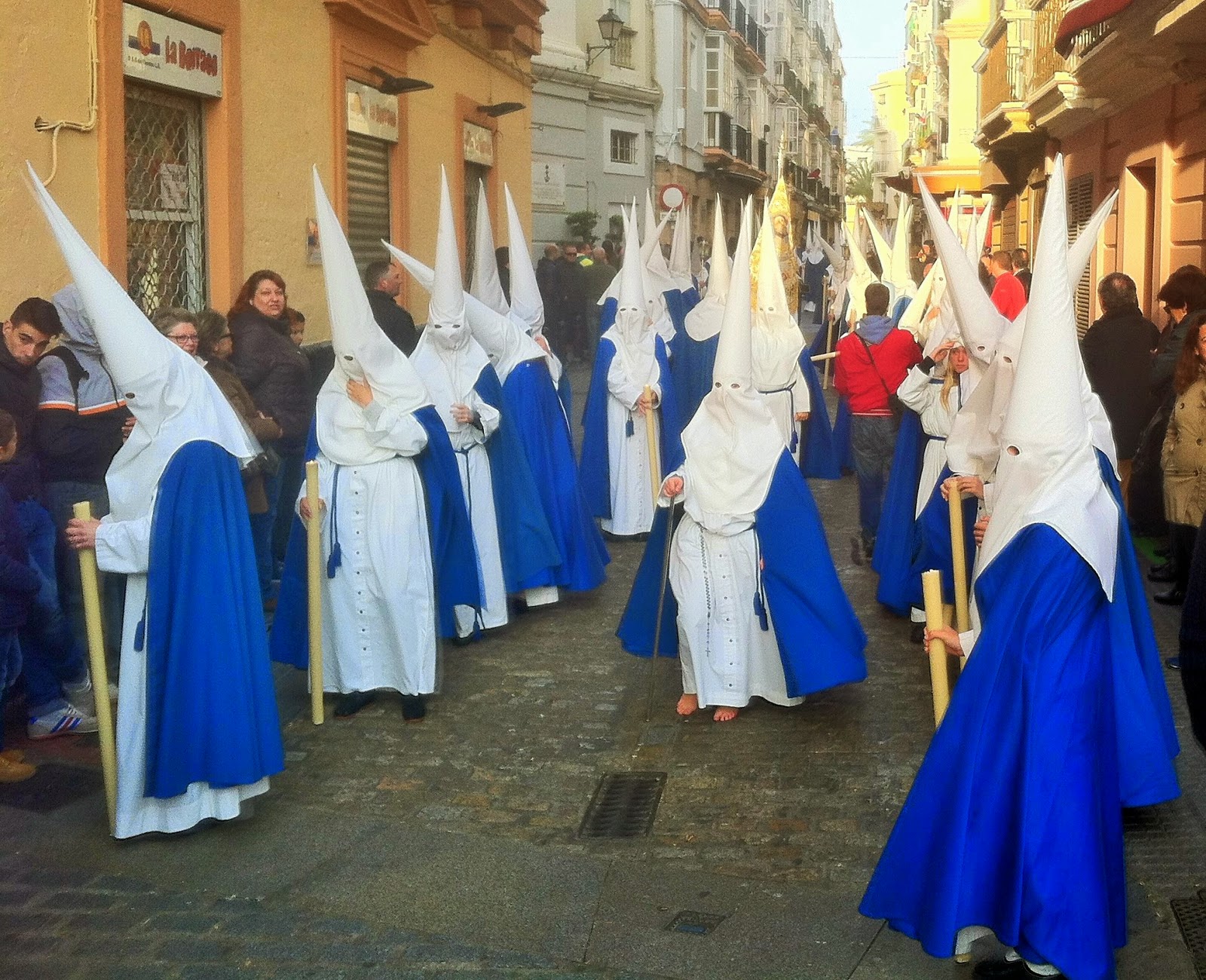 Cadiz turned out to be yet another pleasant surprise.  A beautiful, clean, historic and interesting city we wouldn’t hesitate to visit again. 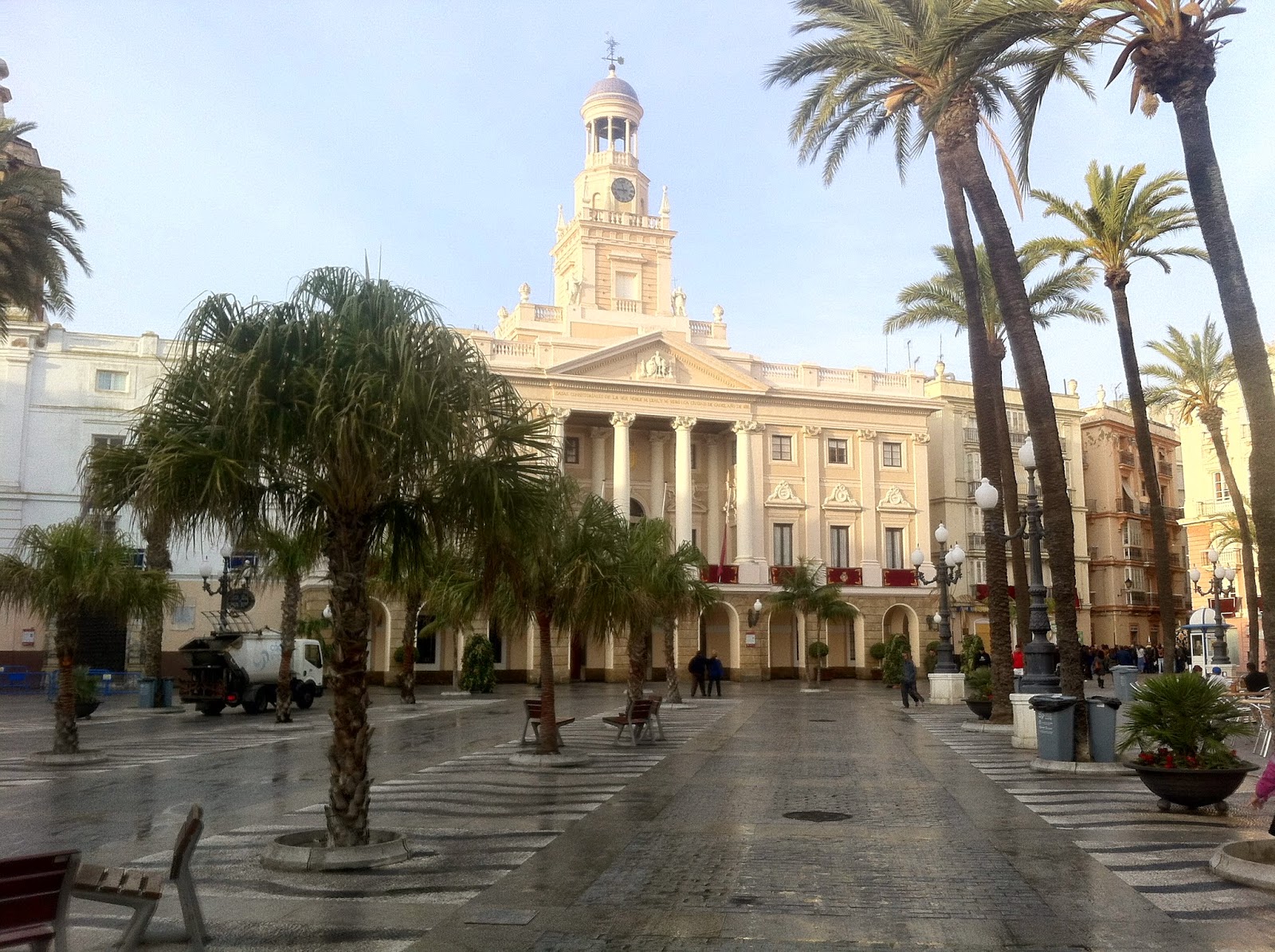 As is my habit, I’ll end my description of this adventure with a few concluding thoughts:


·        Elva and I have learned more about the world in the twenty months since I retired than we did in the previous twenty years.  I’m not arguing that travel is a pre-requisite to understanding, but to truly appreciate what’s going on in the world, you have to see for yourself.


·        We’re gradually being transformed from ‘tourists’ to ‘travelers’.  We’ve learned very little from the ‘tourists’ on the ship but a great deal from the ‘travelers’.  There’s an important distinction between the two.  The latter are true students; the former, just along for the ride.  Being a traveler means stepping out of your comfort zone to see and experience things that tourists are afraid to.  It also means being smart with your money and learning from others who know better.


·        My impressions of Southeast Asia were dead wrong.  Economically, it’s much more advanced than I’d thought.  Singapore is the most impressive city I’ve visited, and Kuala Lumpur is not far behind.  In Indonesia, Surabaya is well on its way to becoming an important city.  The days of European and North American dominance are over.


·        Countries like Morocco, India, Myanmar, Sri Lanka and Thailand need to get their acts together politically before ordinary people see a meaningful difference in the way they live.  The poverty we saw, especially in India and Myanmar, tells me it will be a very long time before this can happen.


·        Despite what we’ve been taught, a democratic form of government is not the only way to achieve economic development and a better standard of living.  Of the countries we visited, Oman, the United Arab Emirates, and Singapore are or were governed by autocrats.  Yet, their people enjoy a very high standard of living.  Compare India, a democracy, to China, an autocracy: there’s no question who’s better off.


·        Ninety percent of the world’s goods are transported by sea.  The largest container ships can carry 9,000 forty-foot tractor-trailer-sized containers.  Think about that!  The concept of shipping lanes was new to me and I saw with my own eyes that the oceans are more than just huge empty spaces.  For example, every year, 60,000 ships pass through the Strait of Malacca.  It’s busier than Cavendish on a Sunday afternoon in August, for goodness sakes!


·        “The longer the cruise, the older the crowd.”  On this cruise, virtually every passenger is retired.  While many of them are hobbled by one affliction or another, a good number are in very good health, even into their early eighties.


·        We’ve directly experienced four of the world’s five dominant religions on this trip: Christianity, Islam, Hinduism and Buddhism.  Naturally, we’re more comfortable among our own kind.  We felt entirely at ease in countries where Hinduism and Buddhism are the dominant religions, but not so where Muslims form the majority.  That may change in my lifetime, but I’m not hopeful.


·        The MS Rotterdam is a community of 1,800 people, two-thirds passengers and one-third crew; from all over the world and from all backgrounds.  As with any community, you get to know some better than others.  The ship has everything you’d expect to see and experience in a community of this size.  Three people died while we were onboard: one, a crew member, while surfing during his day off; the other two, passengers, passed away before reaching the end of the voyage.  The young son of one of the officers learned to walk and is now into everything.  Couples celebrated wedding anniversaries; one their 55th.  Couples ‘hooked up’; others ‘broke up’.


·        Looking back to the places we’ve visited, seven are definite ‘keepers’; places to go back to: London, Malaga, Singapore, Bali, Langkawi, Ajaccio and Barcelona.


·        Spending 88 days in a 200-square-foot windowless cabin on a ship that doesn’t always sail on calm waters is a true test of a relationship.  I’m happy to say we passed, and wouldn’t hesitate to do it again! 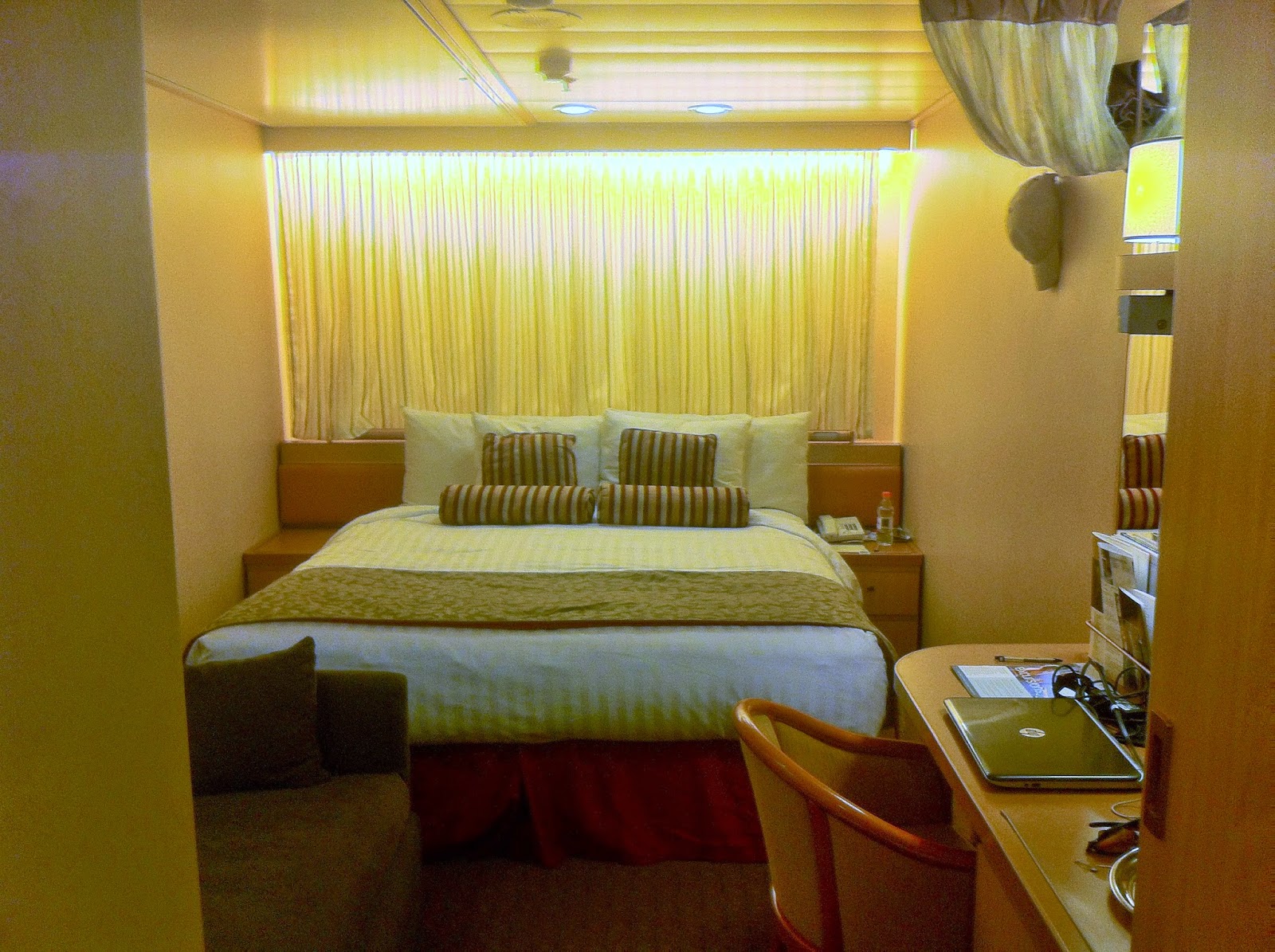 It’s time to go home now and break out the bike and the fishing rod.  Elva and I look forward to planning our next adventure.

Posted by Jean-Paul Arsenault at 03:12 No comments: