There’s a difference between a risk and a gamble. A gamble is a bet on an uncertain outcome; you either win or lose and there’s no allowance for a Plan B. A risk involves the possibility of loss or failure; buy a stock and you take a chance that you’ll lose money, but you might also make some. We took a risk by leaving Charlottetown barely twenty hours before our cruise was to leave Southampton in the south of England. One of our two flights could have been delayed; our luggage could have been late arriving at Heathrow or lost altogether; or we could have missed our bus to Southampton. We could have tested positive for COVID and not been allowed to board the Island Princess at all. All of these were risks.

Admittedly, I like to push the envelope a little when we travel, and this time was no different. Had we missed the boat, I’d have had to figure out a way to catch up with it at its first port of call, Skagen, Denmark. Funny enough, when we docked there on Tuesday morning, August 30, we saw three people and their suitcases sitting outside the tiny cruise terminal; they’d missed the boat, but they’d also figured out how to catch up with it. We would have too, but not without a little cursing on my part, mind you!

We boarded the Island Princess, our first cruise with a company other than Holland America, about ninety minutes before they hauled up the gangplank. The ship felt like home as soon as we got on: lots of wood; lots of carpet; lots of leather; a bit of brass; and several well-appointed lounges. Turns out Carnival Corp. owns both cruise lines and has branded them to appeal to similar clienteles, older folks like us. Having emptied our luggage, we headed for the Lido buffet, half-starved after being served nothing but a dry croissant and a small yogurt, what passes for breakfast on Air Canada these days.

Jet lag always gets me, and this four-hour time difference was no exception. After a restless night, I enjoyed a quiet sea day, exploring the ship and taking in a presentation on the next days’ ports. We docked in Skagen on Tuesday mid-morning, and I spotted rental bikes on the dock. Perfect! We knew where we wanted to go and what we wanted to see, and I figured it would be easier to navigate the city on two wheels than on foot. The young woman said $20 US for two bikes for the day, and I wasn’t long paying her. Nearby, passengers who’d taken the ship’s cycling excursion had paid $90 each for the same thing! We knew they’d be herded like sheep for a few hours and wouldn’t see nearly as much as we would.

We pedaled through the pretty little town and headed toward Grenen, the northernmost point of Denmark. We parked the bikes at the end of the road and walked along the dune-lined shore past German World War II bunkers to the very tip of the peninsula. It’s where the North Sea meets the Baltic Sea, more precisely the bodies of water called Skagerrak to the east and Kattegat to the west. I remembered their names from the TV series, Vikings. A nice Danish couple took our picture, and we returned the favour, straddling the two seas where the waters meet. It was a neat experience! 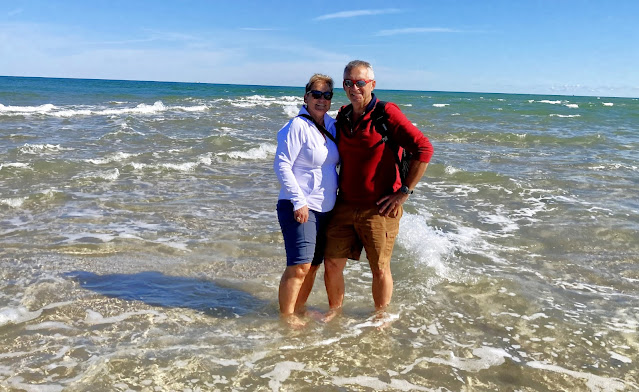 Back in the town, we enjoyed riding through the streets, impressed at the cleanliness and order of the place, with houses all painted the same colour of yellow and topped with red tile roofs. Unlike Charlottetown, Skagen puts the safety of cyclists first; many sidewalks are wide enough for both cycling and pedestrian lanes. 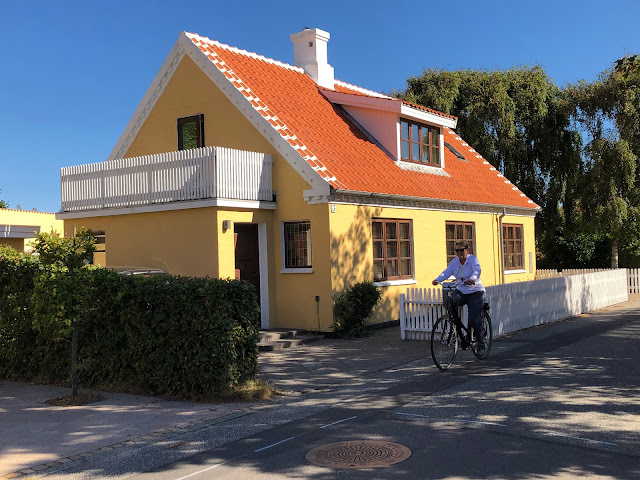 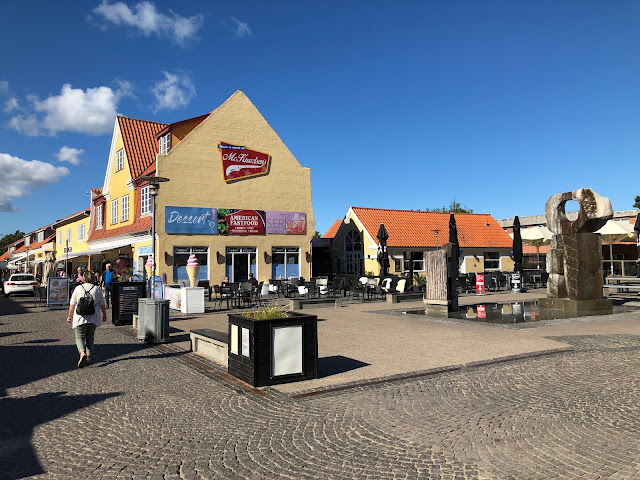 After lunch on the Princess, we headed back through town and pedaled in the opposite direction to see the sunken church. All that’s left of the structure is its white tower, the rest having been demolished after the parish stopped fighting the encroaching dunes in 1795. Skagen reminded us yet again that the smaller places we visit on a cruise can be just as interesting. 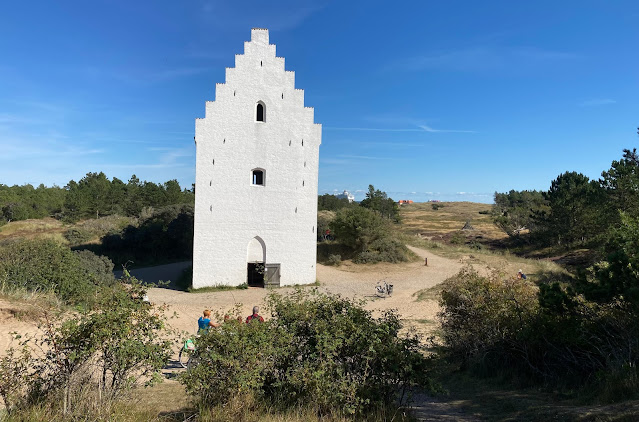 Day four was a sea day, with the ship sailing through the straits separating Denmark and Sweden, crossing the Baltic Sea headed toward Lithuania. Early on day five, we docked at Klaipeda, a decent-sized city of 150,000 in the southwest corner of the country, located just north of the Russian exclave of Kaliningrad. It was a beautiful sunny day, coolish but perfect for walking. Klaipeda is not a popular tourist destination but it’s worth a visit. A busy shipping port split by the river Dané, it features a very attractive river walk. The old part of the city needs a bit of sprucing up and one can imagine former factories like the one shown below one day being transformed into high-end condos. 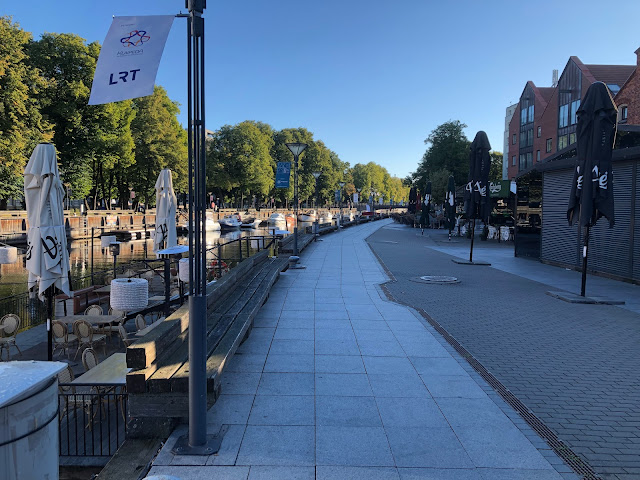 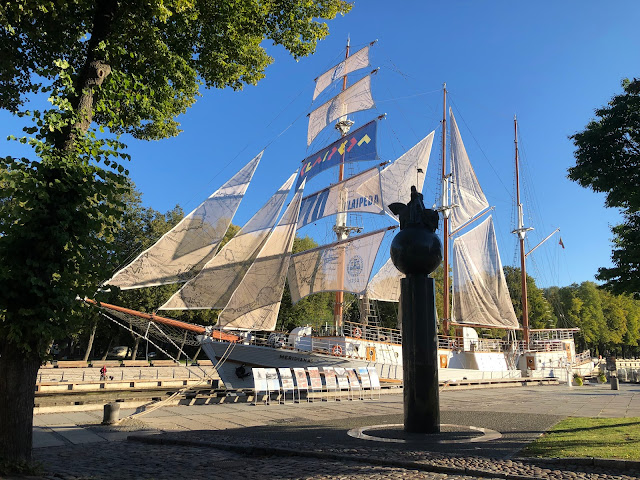 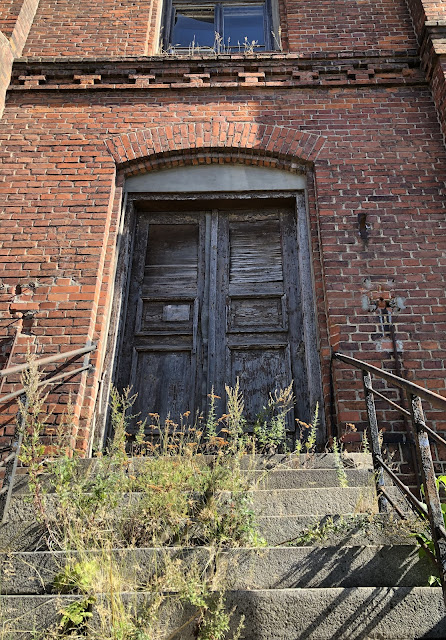 Before Russia attacked Ukraine, making itself a pariah among the free nations of the world, most Baltic cruises featured an overnight stop in St. Petersburg. Unfortunately, we missed out this time but will visit three of the former Soviet republics, Lithuania, Latvia, and Estonia. Interestingly, the last President of the USSR, Mikael Gorbachev, he of glasnost (openness) and perestroika (restructuring) and winner of the Nobel Peace Prize, had passed away on August 30. He oversaw the breakup of the USSR in the early 1990s, not long after President Ronald Reagan uttered his famous line: “Mr. Gorbachev, tear down this wall”, meaning of course the Berlin Wall. In 1990, Lithuania was the first of fourteen former Soviet Socialist Republics to declare its independence. We’ll have visited nine of the fourteen by the end of this trip; only Armenia, Georgia, Moldova, Ukraine, and Belarus remain.

It poured rain on day six as we walked from the ship to downtown Riga, the capital of Latvia. “There’s no such thing as bad weather, just the wrong clothes”, I repeated to myself, enduring a chilly morning stroll through its historic old city, a UNESCO World Heritage Site. Riga has a population of close to one million, making it the largest city in the three Baltic states. We admired the beautiful art nouveau buildings and the quiet cobblestone streets. The locals we met were very friendly and helpful, and the best measure of that is invariably the response to tourists like us who ask for directions or to use the washroom.

Freedom monuments are common in the city, reminders of how far the country has come since the years of occupation by Nazi Germany and the USSR, from 1940 to 1990. The three Baltic states are members of both the European Union and NATO, and all have adopted the Euro as their currency. Ukrainian flags fly everywhere, statements of solidarity and reminders of how fragile democracy can be. Outside a war museum, we studied a series of panels outlining NATO’s battle presence in Latvia. The enhanced forward presence battlegroup in Latvia is led by Canada; it made us proud to be Canadian. Latvia is a prosperous and stable country. We can only hope it will stay that way. 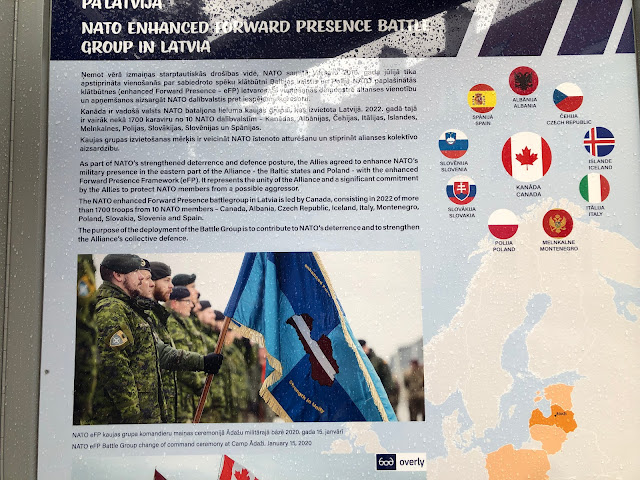 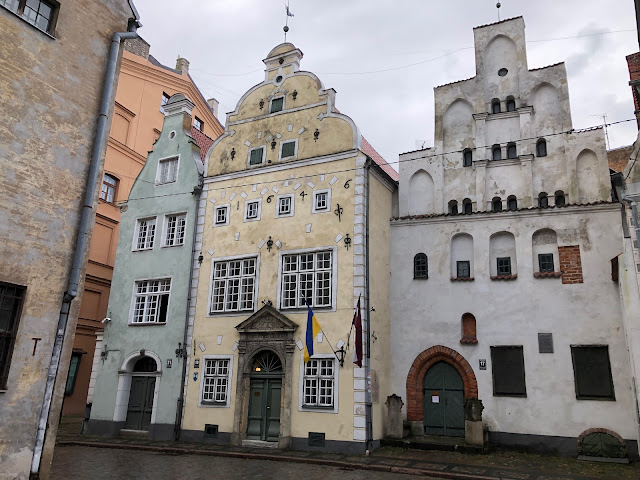 The Princess sailed past dozens of islands as we made our way into Helsinki harbour on Day eight of our journey. I was fighting a bad cold and wasn’t sure whether to board the hop-on-hop-off or set out on foot; I decided on the latter. Twenty-two kilometers later, we stepped back on the ship after spending an enjoyable five hours touring central Helsinki. As was the case in the other cities we visited, we got our information on where to go and what to see from whatsinport.com and the destination guide onboard ship.

We also found an excellent tourist information office in the market square. The young woman who served us said the fortress at Suomenlinna was a must. So, we bought tickets for the short ferry ride and toured the sprawling site on foot. Construction of the fortress began in 1748 when Finland was part of the Kingdom of Sweden. The last Finnish military garrison left in 1973 and Suomenlinna was added to the list of UNESCO sites in 1991. While we didn’t have enough time to take it all in, the visit was worthwhile, and the ferry ride afforded stunning views of Helsinki’s inner harbour.

We visited the Orthodox Cathedral called Uspinski as well the Lutheran Cathedral, toured the train station, and walked to the city’s central library, the Oodi. As the third photo shows, the Oodi is an impressive calling card for Finnish architecture, a combination of flowing lines, wood, glass and steel. 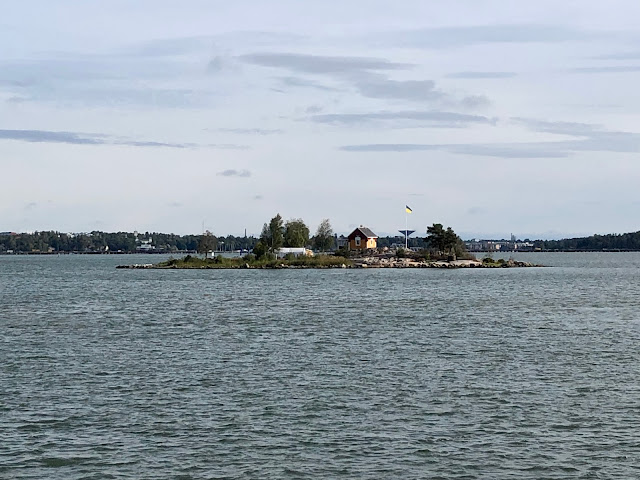 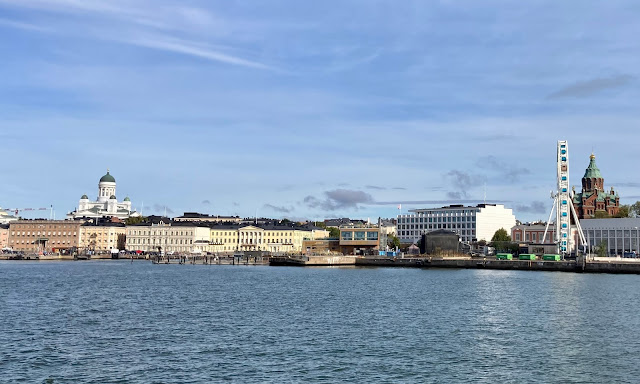 As with so many other European cities, Helsinki is laid out in such a way as to favour pedestrians and cyclists over cars. The main thoroughfares do not allow on-street parking and sidewalks are broad enough to allow safe passage of pedestrians and cyclists. Our laziness and our addiction in Canada to revenue from parking meters are damn poor excuses for the chaotic system we put up with day in and day out.

The next morning found us docked in Tallinn, the capital and largest city of Estonia, third and last of the Baltic countries on our list. Tallinn is the financial, industrial, and cultural capital of this former Soviet Republic. It’s one of the main IT centres in Europe and is where Skype got its start. But we weren’t here to see the financial district.

We took the shuttle into the city and walked to Old Town, a UNESCO World Heritage Site, complete with gates and walls, a defensive system dating to the 13th century. Of all the places we’ve visited thus far on this trip, Old Town Tallinn is the most walkable, the most interesting and, arguably, the most beautiful. After shopping for local amber, we made our way to the tourist information centre and were told that a “by donation only” two-hour tour would leave from there shortly. By the time Marko, the tour guide, showed up, we were a crowd of forty or so. Elva and I have taken dozens of tours on our travels and have had many guides along the way. Marko, a history teacher in the local school system, beat all others by a mile; he was knowledgeable, friendly, and engaging. He told us that a teacher only makes $25,000 CDN a year in Estonia. We all made his two-hour tour worthwhile.

By the way, if we look chilled, it's because it was a damp 8 degrees C in Tallinn when a young couple from Arizona caught us sitting next to M. Cochon. 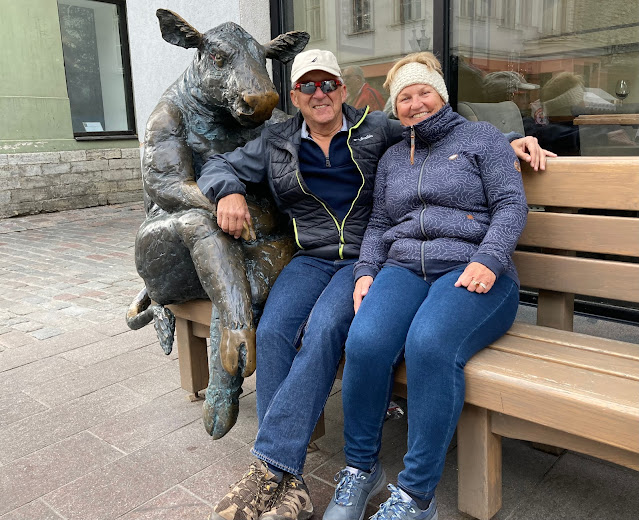 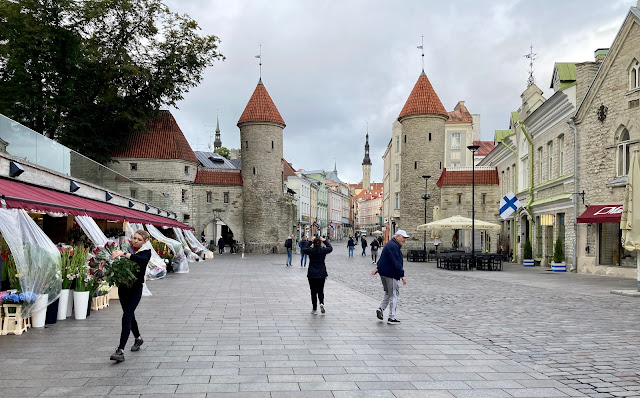 Old Town Tallinn has many beautiful buildings, cobblestone streets, enticing eateries, and spacious squares, but the one thing that stands out is the number of Ukrainian flags. The Baltic States in particular feel a great affinity with the Ukrainian people. This photo was taken at Independence Square showing both flags side by side; the Ukrainian flag also flies above the door to the Parliament Building, flanked by the Estonian and European Union flags. While I’m sure President Zelenskiyy would prefer soldiers and weapons, these expressions of solidarity are both genuine and meaningful. 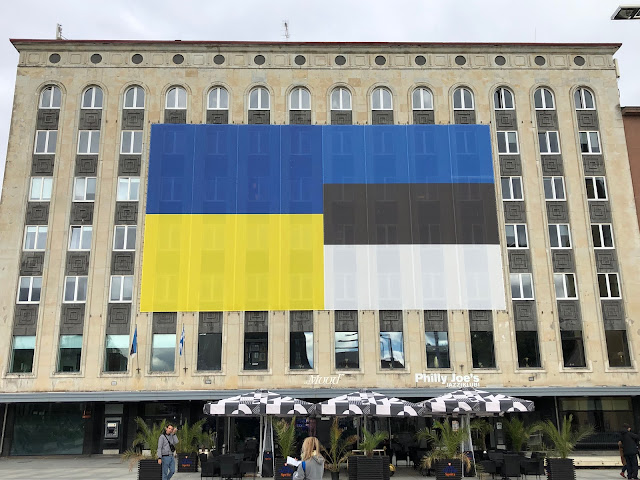 Posted by Jean-Paul Arsenault at 10:27